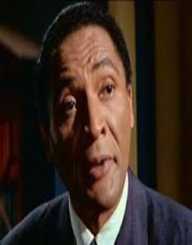 William Marshall rose to fame not only as an American film actor but is also a known figure in Broadway as well back in the 1950s until the 1970s. He was also notable for his deep bass voice and a towering height of 6’5” (196 cm). He died from suffering complications from diabetes and Alzheimer’s disease at the age of 78 on June 11, 2003.

Born in Gary, Indiana as William Horace Marshall on August 19, 1924, he was the child of Vereen and Thelma Edwards. He developed an interest in the arts and enrolled in the arts program of New York University. Later on, his attention turned to act and attended a number of schools namely the Actors Studio, the American Theatre Wings, and the Neighborhood Playhouse that focused on theatre.

In 1944, he made his debut appearance at Broadway in the production of Carmen Jones. From there, he starred in other Broadway productions such as the 1951 revival of Green Pastures of which he took on the role of De Lawd and a number of Shakespearean plays. Most notable among these is his performance as the lead role in Othello which he performed at least six times in production. Because of his outstanding performance, he was dubbed as “the best Othello of our times” by Harold Hobson, a columnist at the London Sunday Times.

William Marshall made his entry into the world of cinema in 1952 as a Haitian leader in the film Lydia Bailey. His next role came in two years later in the form of Glycon, the comrade of Victor Mature in the movie Demetrius and the Gladiators which premiered in 1954. Some of his other film involvements include the 1957 film Something of Value, and The Boston Strangler in 1968.

His breakthrough role came in 1972 when he took on the title role of the film Blacula and its sequel entitled Scream, Blacula, Scream! It was the first recorded event in the history of cinema wherein an African-American played the role of a vampire and was a box office hit despite having mixed reviews.

As a TV actor, he became known for playing the role of King of Cartoons in Peewee’s Playhouse. The part was previously manned by Gilbert Lewis before Marshall took over in the 1980s.

Aside from acting, William Marshall also had his share of work as a producer. He performed and produced on theatre in PBS’ production of As Adam Early in the Morning which bagged him two local Emmy Awards. Marshall also taught acting in a number of universities such as the University of California, the Mufandi Institute, and at Chicago’s ETA Creative Arts Foundation and was hailed by the said foundation in 1992 as one of its Epic Men of the 20th Century.