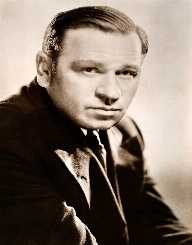 Wallace Fitzgerald Beery was born on April 1, 1885, in Clay County, Missouri. He was the youngest of three sons to Noah Webster Beery and Frances Margaret Fitzgerald. Both of his brothers also became Hollywood actors. In the 1890s, the family moved away from their farm in Clay County to Los Angeles, where Beery’s father began working as a police officer.

Beery attended the Chase School in Kansas City but showed little interest in academic studies. During his time at school, he also to piano lessons. As a teenager, he ran away from home two times. On one of these occasions, when he was 16 years old, he joined the Ringling Brothers Circus and became assistant elephant trainer. He spent two years with the circus but left after being clawed by a leopard.

In 1904, Beery went to New York City, where his brother Noah was living. He joined a comic opera as a baritone and started his career in Broadway. His first notable role was in the 1907 production of The Yankee Tourist. In 1913, Beery moved to Chicago where he began working for EssanayStudions in the drag role as Swedish maid Sweedie. In 1915, he reprised the same role in Sweedie Goes to College. After this role, Beery began portraying villains in several films, most popular of them being the role of Pancho Villa in Patria. He starred in several prominent films like The Las of the Mohicans, The Round-Up in 1920, The Lost World in 1925, Casey at the Bat in 1927, and several others.

Beery had a very powerful bass voice, which made him become one of the lead actors in the dawn of the sound film era. Irvin Thalberg from Metro-Goldwyn-Mayer first contracted him. His first sound film was the 1930 prison film The Big House, where he portrayed the savage convict Butch. For the role, Beery was nominated for the Academy Award for Bes Actor. The same year Beery also starred in Min and Bill. The movie was a major box office success and made Beery one of the lead earning actors.

Beery’s first Academy Award win came for the role in the film The Champ alongside Jackie Cooper. That year he shared the Oscar award with Frederic March. In 1930, he also starred in Billy the Kid. The following year, Beery starred with Jean Harlow and Clark Gable in The Secret Six, and again with Gable in Hell Divers. He and Gable also starred together in the 1935 film China Seas. For his role as Long John Silver in the 1934 Treasure Island, Beery won the golden medal at the Venice Film Festival.

During the 1930s, Beery became one of the Top 10 box offices stars in Hollywood. In 1932, his contract with MGM allowed him to receive $1 more than any other actor, which made Beery the highest paid actor in the world. During this decade, Beery starred in several films with Marie Dressler and Marjorie Main. During the 1940s, his career began to decline. He appeared in the war propaganda film Salute to the Marines and Bad Bascomb.

In 1915, Wallace Beery married his first wife, teenage actress Gloria Swanson. During their marriage, Beery’s career was not going well, and she was the breadwinner in the family. Swanson’s autobiography later stated that Beery raped her in their wedding night, and when she became pregnant, she took abortifacient drugs and lost their child. The marriage did not last, and in 1924, Beery married to Rita Gilman. The couple did not have their children, but they adopted daughter of her cousin, Carol Ann.

In 1939, Beery was involved in attacking actor Ted Healy, who died from the injuries of the attack. After this incident, Beery adopted a 7-month-old girl Phyllis. She appeared in several publicity photos at the beginning but was never seen again afterward. It later turned out that Beery took the girl from a single mother and had no official adoption papers.
Beery was known in the industry as very difficult to work with. Several child actors, including Jackie Cooper and Margaret O’Brien, recalled him being very unpleasant and undermining their performances. Beery died on April 15, 1949, after suffering a heart attack. After his death, he was honored with a star on the Hollywood Walk of Fame.