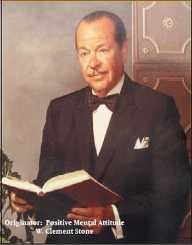 American businessman, philanthropist, and author W. Clement Stone was born on Chicago’s South Side on the 4 May 1902. Stone was three years old when his father ditto is leaving the family impoverished.

W. Clement Stone did not graduate from high school until 1922 when he was awarded a YMCA high school certificate. He followed this up with various courses.

As a young child, W. Clement Stone sold newspapers to help the family budget after his father died. When he was sixteen years old, he joined his mother selling insurance policies. Cold-canvassing office buildings as a teenager Stone was selling soon selling almost fifty systems a day. Once he was confident as a salesperson, Stone organized his own sales team. In 1922 W. Clement Stone was operating his insurance agency, the Combined Insurance Company of America. During the Great Depression, he spent time training teams of agents focusing on policies that would be easy to sell and renew.

As W. Clement Stone’s success continued, he bought up other companies and absorbed them into his business. Then in 1982, he merged with the Ryan Insurance Group. The company was renamed Aon Corp in 1987.

This effort produced his Positive Mental Attitude (PMA) business philosophy. His optimistic business outlook which had enabled him to start the Combined Insurance Company of America with one hundred dollars.

W. Clement Stone married Jessie Carson on the 16 June 1923, and the couple was married for seventy-nine years when Stone died. They had three children: Norman, Clement, and Donna. W. Clement Stone killed in Evanston Illinois on the 3 September 2002. He was a hundred years of age. Two of his children predeceased him: Clement (d. 1986) and Donna (d. 1985). His son Norman Stone (b. 1939) is a psychotherapist as well as an art collector and philanthropist.

Initially when the Stone Foundation was formed grants were given in four areas: children & youth, education, religion and mental health. Today the grant process focuses on childhood and youth development plus education. The foundation’s asset base is in the region of $80 million. The family keeps up the tradition of philanthropy that Clement Stone and his wife began. At the time of his passing Stone had given over $275 million to charitable organizations.

W. Clement Stone’s generous financial contributions to Richard Nixon’s election campaigns in 1968 and 1972 helped to provide funds for Nixon’s team to use in their battle against George McGovern and other Democratic political figures. Because of this Stone’s name was mentioned in the congressional debates following the Watergate scandal. After Watergate (1974) US legislators created the Federal Election Commission to control political donations.

Later in 1980, Richard Nixon attended a ceremony honoring Stone and said at the time that no-one else had given him more and asked for less. In 1985 Stone emphasized a positive aspect of the Watergate scandal: how attorney generals and state attorneys would in future be more diligent about pressing charges against public officials if warranted.

Stone’s belief in the power of optimism drove him to write some books on the subjects including Success Through A Positive Mental Attitude (co-author Napoleon Hill), The Success System That Never Fails and The Other Side of the Mind (co-author Norma Lee Browning). W. Clement Stone was also the founder of the magazine Success Unlimited.