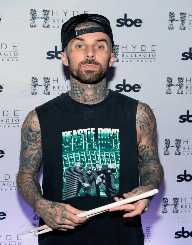 Travis Landon Barker is an American musician and producer. He was a lead drummer for Blink-182. He has also been associated with several acts like Yelawolf, Kid Cudi, T.I amongst others. His style of drumming is diverse. He does everything from Hip Hop to the country to punk and even rap and alternative rock.

Travis Barker was born in Fontana, California on November 14, 1975, to Randy, a mechanic and Gloria Barker a babysitter. He got his first drum kit from his mum at age four. He started taking lessons at age five with a drummer, Michael Maj. He also took lessons in playing the trumpet and piano. At some point, he even sang in the madrigals male and female choir. As he grew, he wanted to go into professional surfing and skateboarding. His mother had been diagnosed with cancer. She died the day before he resumed High school. Before her death, she encouraged him to follow his music dreams. He went to Fontana High School.

Travis and Michael Solorzano, his best friend, joined a talent show and performed in a drum-off that Travis emerged the winner. He began performing at several competitions and gained a lot of experience from it.

Travis Barker worked as a garbage collector in Laguna Beach. He also started playing with the band Snots. He eventually went on to play with the band Feeble where he met Chad Larson. Chad Larson recruited him to play for the new band he had co-founded called Aquabats. Although Travis took it as a temporary job, he eventually joined them. They went on to produce their studio album. He was nicknamed Baron Von Tito.

In late 1997, the Fontana based group, Aquabats released their album. They toured nationwide with San Diego Band Blink-182. During this period, the drummer for Blink-182, Scott Raynor began having conflicts with his team members due to some personal issues.

Travis was asked to replace him after he left. He continued with them after the drummer returned and was asked to get help for his heavy drinking. He learned their 20 song setlist in forty-five minutes and played it flawlessly. He played with them all through 1998. He also played in The Vandals, filling in for Josh Freese.

Blink-182 had signed with MCA records and was given a recording budget. They got to work writing songs. Travis drove long distances to participate in the writing, after which they went on to record and by June 1999, they released their third album, Enema of the State. The album was hugely successful, and they became them the pop punk band of the time. All the Small Things, one of the singles in the album was number 6 on the Billboard’s Hot 100. The album itself sold over 15 million copies worldwide.

Their next album released in 2001 called Take Off Your Pants and Jacket was extremely successful going triple platinum within three weeks of release. It was number one on Billboard’s Top 200 in the first week of release. Their fifth album was called Blink-182 and was released in 2003, and although reviews were positive, fans were split by the more mature sound of the new album.

Travis Barker opened his record label LaSalle records in 2004 named after his favorite Cadillac and signed The Kinison as the first group to the label. In the same year, he injured his foot but still played with one foot the next night. He was in so much pain that they had to cancel the tour and the doctor confirmed that he had torn ligaments and tendons.

He began to work on a solo album that contained remixes of various songs and the project involved many people like Damian Marley and Willie Nelson. In 2008 as well, he worked with DJ AM on a project they called TRV$DJAM. They combined classic songs which the DJ mixed along with Travis playing live drums. In 2015, he was on tour as the new of Antemasque, a four-piece rock band.

Apart from drumming Travis Barker has his retail store that deals in clothing, accessories, and skateboards called Famous Stars and Straps. The city closed the store itself, but the market was converted to an online store.

Travis Barker married his girlfriend of two years, Melissa Kennedy in 2001. They divorced after nine months. While they were still together, during one of his tours in 2000, Two men flirted with his then-girlfriend while they were at Taco Bell Travis got into a fist fight with them and beat them up, despite their being larger than him. He, however, sustained a hairline fracture and had to be replaced until he got better.

Travis got his first child in 2003 from Miss USA Shanna Moakler. They got married in 2004. They had another child and in 2006. They divorced in 2008. He felt guilty about being an absentee parent after the divorce. As at 2016, they sorted out their differences and started co-parenting.

In 2008, he and DJ AM along with a few people had a fatal plane crash. He and AM were the sole survivors. He was hospitalized for months and had to begin a vegan diet to put on some much-needed weight and for protein to heal his burns.

Travis Barker eventually sued the plane owners Goodyear Tire & Co. The mother of his late security guard who died in the crash joined in, but the matter was settled out of court with confidential terms.

Travis Barker had a brief stint with drugs as a teenager in high school. He had a brief reoccurrence as an adult after his divorce with Shanna Moakler. He took prescription pills for a time due to his guilt for being an absentee parent.

Travis Barker is a Catholic and deeply religious. He prays with his children and has religious tattoos including one of the crosses on his arm.