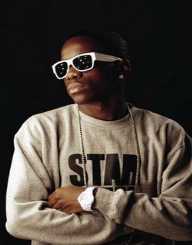 Rapper Tinchy Stryder was born Kwasi Danquah in 1987 in Ghana. His family relocated to London in 1995.  He was brought up in, Bow in East London,  was quite close to one of the most dangerous areas of London.

Stryder went to St Bonaventure’s Catholic School in London. Later on, he enrolled at the University of East London, graduating with a B.A. His studied included animation, digital arts, and film.

Tinchy Stryder got involved in the music scene in London quite early.  At fourteen experimenting with what was to become grime music,  pirate radio with Dizzee Rascal. The music they were playing with did not have a genre, but later on, it would become known as grime. Songs from this period include U Were Always (2002). He appeared on Dizzee Rascal’s music video and featured on Ruff Sqwad’s Guns and Roses Volume One (2005) and Volume Two (2007).

In 2006, Tinchy Stryder was doing a show at a club in Norwich; he had filled in as a last moment replacement. The club’s promoters were impressed and asked if they could manage him.

These two promoters were Archie Lamb and Jack Foster who helped raise money locally to produce their prodigy’s first album.

Star in the Hood, his debut album, was released in 2007. The album contained the songs Breakaway, Something About Your Smile and Mainstream Money. Takeover then released Cloud 9 The EP in 2007. He also worked with record producer Maniac, releasing Tinchy Stryder vs. Maniac 2008. In January 2009, Take Me Back was a hit. Then In August 2009, he released Catch 22 and the track Number 1, stayed on the top of the charts for four consecutive weeks.

He took a break from music to concentrate on business, although continuing making music, he did not release much anything during this period. Then in 2014, he released his fourth album, 360, produced by his label, Takeover Roc Nation. In interviews, he has said owning his label is related to the changes taking place in the music industry where digital music is changing the way people buy music. (2014 interview with Clash Music).  In 2014 he also did a song with the Chuckle Brothers for charity.

In 2014, Tinchy Stryder was a contestant on the Australian I’m A Celebrity...Get Me Out of Here. His fans followed his experience on Twitter with enthusiasm.  Stryder came fifth. Before getting involved, he had said that being in the jungle was going to be a big challenge for an East London raised city guy. As the reality show was filmed in the Australian rainforest, he admitted to being afraid of spiders, having never slept in a tent and worrying about the food. During the reality show he taught Michael Buerk, the British journalist who was 68 at the time;  to rap. Buerk had been honest with him and said that he did not like rap. Stryder later remarked that he was disappointed at how many of his scenes were edited out of the show.

Stryder founded his publishing company in a joint venture with the music publishing arm of EMI.

During 2015 Tinchy Stryder released a single Imperfection but it failed to chart. He also published Six Four Stuff and Blurt as a SoundCloud offering. Then he released a new album, The Cloud 9 LP 360.

Catch 22 won Tinchy Stryder wide acclaim. It his mega hit Number 1 which stayed on the top of the British charts for four weeks.

One of the early awards Tinchy Stryder received was the 2008 Urban Music Award for Best Video. The same year he was nominated for the Music of Black Origin Awards, Brit Awards, Mp3 Awards and the MTV Europe Music  Awards. These awards related to Catch 22, his second album,  which contained the hits Number 1 and Never Leave You. In 2010 he won the Music of Black Origin Awards for the best single.

Stryder has been in a long-term relationship with Helen Haben.

He was raised in a religious family and went to church as a young man. He has said that he still believes in God but does not attend church.  (Interview with The Telegraph UK).

He enjoyed playing soccer as a boy and is a Manchester United supporter.

Tinchy Stryder works with various charities, one being Keep A Child Alive which focuses on families dealing with HIV-AIDS. He is also on record as saying that his goal is to be a positive role model for kids. In 2014, Stryder made a single with the Chuckle Brothers entitled To Me, To You (Bruv) and the proceeds all went towards the African-Caribbean Leukaemia Trust.