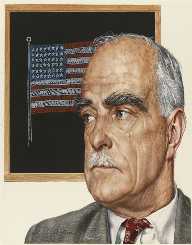 Thornton Wilder was born on April 17, 1897. He was an American novelist and playwright. In his career, he won three Pulitzer Awards for his novel and plays ‘The Bridge of San Luis Rey,’ ‘Our Town’ and ‘The Skin of Our Teeth.’He was a well-known novelist who wrote passionately.

Thornton Wilder was born on April 17, 1897, in Madison, Wisconsin, United States. He was born to Amos Parker Wilder who was a United States Diplomat and a newspaper editor and Isabella Niven Wilder. His family spent some of their time in China. He was brought up alongside three siblings, Amos Wilder, Charlotte Wilder and Janet Wilder. He attended The Thacher School in Ojai, California. He started writing while he was a student. He was teased by his fellow students because he was highly intellectual. He later attended the English China Inland Mission Chefoo School at Yantai when his family was living in China for some time. He also attended Creekside Middle School in Berkeley.

In 1915, Thornton Wilder graduated high school from Berkeley High School. He joined the army during World War I for three months. He attended Oberlin College. In 1920, he graduated from Yale University with a Bachelor of Arts Degree. He did not give up on writing while he was still in college as he continued refining his art of writing. He was a member of the Alpha Delta Phi fraternity which was a literary society. In 1926, he graduated with a Master of Arts Degree in French from Princeton University.

After graduating from Princeton college, Thornton Wilder went ahead to study archaeology and Italian in Rome. In 1921, he began teaching French at the Lawrenceville School in New Jersey. In 1926, his first novel titled ‘The Cabala’ was published. The next year he published his novel ‘The Bridge of San Luis Rey’ which brought him success and fame. In 1928, he resigned from teaching at the Lawrenceville School. He went ahead to teach at the University of Chicago for seven years, that is, from 1930 to 1937.

In 1931, Thornton Wilder published his translation of Andre Obey’s adaptation of the tale titled ‘Le Viol de Lucrece.’ In 1938 and 1943, he won the Pulitzer Prize for Drama for his plays ‘Our Town’ and ‘The Skin of Our Teeth’ respectively. He later became a visiting professor at Harvard University. He served as the Charles Eliot Norton Professor for one year. In 1968, he won the National Book Award for his novel ‘The Eighth Day.’ Wilder translated plays by Andre Obey and Jean Paul Satre. He also wrote Libretti to two operas, ‘The Long Christmas Dinner’ and ‘The Alcestiad’ composed by Paul Hindemith and Louise Talma respectively.

Thornton Wilder wrote a screenplay for Alfred Hitchcock’s thriller ‘Shadow of a Doubt’. His book ‘The Bridge of San Luis Rey’ has been received well and is popular with the masses. In 2001, British Prime Minister Tony Blair quoted the book during the memorial service for victims of the 9/11 attacks. In 1948, he published his novel ‘The Ides of March.’ In 1962, he moved to Douglas, Arizona for twenty months to work on his novel ‘The Eighth Day.’ In 1973, his novel ‘Theophilus North’ was published.

Thornton Wilder was viewed as a homosexual, but he never talked about his homosexuality in his novels or publicly. It was presumed that his friend Samuel Steward was his lover, but it was never confirmed. He died on December 7, 1975, of heart failure. He was interred at Hamden’s Mount Carmel Cemetery.