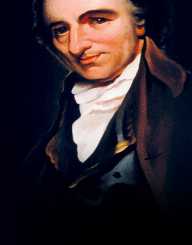 Thomas Paine was born into a Quaker family on the 9 February 1737 in Thetford, Norfolk, England. His father was a corset maker of modest means.

Thomas Paine had a minimum basic education then left school to take up employment. He then took up an apprenticeship as a corset maker but was not suited for the work.

Thomas Paine tried various jobs including going to sea, teaching, working as a tobacconist and as a grocer. Eventually, he got a job working as a tax collector while at the same time managing a shop (1768-1774). He was eventually dismissed from his job as a tax collect after agitating for higher salaries for excise offices and petitioning Parliament.

In 1774 he met Benjamin Franklin in London. Franklin gave him letters of recommendation and advised him to migrate to American Colonies if he wanted to get ahead in life.

Thomas Paine took Franklin’s advice and on the 30 November 1774 he arrived in Philadelphia. He began working as a journalist. The following year he published African Slavery in America, a critique of slavery. He then found employment as co-editor of the Pennsylvania Magazine. Paine was alert to the political unease in the Colonies as a result of the Boston Tea Party. By 1775, the battles of Lexington and Concord had taken place. Thomas Paine was sympathetic to the view that the Colonies had the right to protest against a government that imposed high taxes on them without representation in the Parliament at Westminster. He could also see no reason why the colonies should remain dependent upon England. These ideas were contained in his pamphlet Common Sense published on the 10 January 1776. He believed that it was a matter of time before the colonies would be independent of England. He called for a declaration of independence.

Common Sense was a success and was reprinted throughout the colonies. It was also printed in England. Scotland, Holland, France, and Germany. American sales amounted to over 100,000.

When the War of Independence began, Thomas Paine volunteered in the Continental Army. It was during this time that he wrote his sixteen American Crisis papers. These papers were published between 1776 and 1783. The first of these essays, The American Crisis was published on the 19 December 1776 in the Pennsylvania Journal.

In 1777 he was appointed Secretary of the Committee of Foreign Affairs. Then in 1779, he was obliged to resign in 1779 after an indiscretion concerning private information. Thomas Paine then took up a position working in the Pennsylvanian Assembly as a clerk, meanwhile continuing with his writing and philosophy. He was actively involved in raising finance to help Washington with supplies. Short of money himself, he often relied on his American friends for financial assistance. After the war was over, Congress awarded Paine $3000, Pennsylvania gave him $500, and New York gave him with a farm in New Rochelle.

Thomas Paine turned to inventing things and carried out scientific experiments. He found a method of building an iron bridge. In 1787, he left for England and Europe to seek a market for his bridge. He there remained for four years. During his time in England, he published The Rights of Man (1791-1792). The book was banned in England, mainly because of its opposition to the role of the monarchy in society.

Thomas Paine then went to France. He was made a French citizen in August 1792 and was elected to the National Convention. Then in 1793, he fell out with French radicals when he voted against the execution of King Louis XVI. Robespierre subsequently sent him to Luxembourg prison until James Monroe organized his release. During his time in prison, inspired by the French Revolution, he began working on The Age of Reason. For a long time, The Age of Reason was believed to be anti-religion when he was writing about deism.

After his release from prison, Thomas Paine stayed in France than in 1802 to the American Colonies at the invitation of Thomas Jefferson, who was an admirer of his. Paine arrived back in the United States where he was with criticism and hostility. Many had forgotten what he had done and stood for. Undeterred he continued with his writing attacking religious superstition and other matters.

Thomas Paine’s first wife was Mary Lambert whom he married on the 27 September 1759. Mary became pregnant and died after going into early labour. The child was stillborn.

He later married Elizabeth Ollive on the 26 March 1771 in the Parish of Saint Michael, Lewes, Sussex, England. They were legally separated in 1774 shortly before he left England for the American Colonies.

Thomas Paine died on the 8 June 1809 in New York City. In his final years he was viewed as a lonely outcast.

Although Paine’s remains went missing a monument was erected on the original graveside. His birthplace in England has a plaque, there is a bust of him in the Hall of Fame at The Thomas Paine Cottage is the last building in North America that was owned by Thomas Paine and is open to the public.New York University and a status of him in Paris, Frances.

In New Rochelle, New York, the Thomas Paine Cottage is the last building in North America that was owned by Thomas Paine.