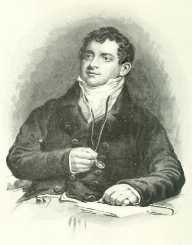 Thomas Moore was a famous Irish poet, songwriter, Singer, and Entertainer. He is best known for the lyrics of 'The Minstrel Boy' and 'The Last Rose of Summer.' He also wrote 'Memoirs of the Life of Richard Brinsley Sheridan,' 'The Fudge Family in Paris', 'and The Fudge Family in England.' Most of his poems have been turned into music by famous composers like Robert Schumann, Gaspare Spontini, Hector Berlioz, Henri Duparc, William Baker and Charles Ives.

Thomas Moore was born on May 28, 1779, in Dublin, Republic of Ireland. His father was Irish and his mother from Wexford. He had two sisters, Ellen and Kate. Growing up, Thomas lived performing arts and music. He wanted to be an actor, and he was even featured in many plays including 'The Poor Soldier' by John O'Keeffe.

Thomas Moore went to Samuel Whyte's English Grammar School in Grafton Street, Dublin. In 1975, he was admitted to Trinity College and was severely affected by the turmoil caused by the French Revolution. He later went to study law at MiddStevensons in London.

His works like; ' Believe Me if All Those Endearing Young Charms,' 'The Harp that Once Through Tara's Halls' and 'The Meeting of the Waters' made him widely known. During this time, Thomas Moore met Lena Angese with whom they were very close. She encouraged him so much and helped him in his future compositions. She was however found dead after she disappeared for a few days.

In 1803, Thomas Moore was made the registrar of the Admiralty in Bermuda. He, however, didn't like his stay there. He later left for Norfolk after a short stay in Bermuda. Then, he went on The Grand Tour where he got to travel through many Americans cities and towns. In some of the cities like Philadelphia, he was already famous.

Thomas Moore sailed back home in November 1804 on the Royal Navy Ship which was from Nova Scotia. He published 'Epistles, Odes and Other Poems' when he got home. In most writings used the theme of slavery in his writings. Francis Jeffrey made a critic concerning the subject of his writings and Thomas challenged him to a duel.
Between 1808 and 1810, Thomas Moore was featured in many plays along with the Kilkenny Players. His roles were mostly comic; for instance, he was O'Keeffe in 'The Castle of Andalusia' and Sheridan's in 'The Rivals.' He also worked with John Stevenson's writing Irish tunes which were later published. Some of the tunes became popular including; 'The Minstrel Boy,' 'Off' and 'Last Rose of Summer.'

Later in 1811, Thomas Moore wrote 'M. P', a comic opera with Samuel Arnold. He had however lost interest in writing plays. He decided he would not write any other plays. He wrote a story in 1818, 'The Fudge Family in Paris', which was about a family's adventures when they traveled to Paris to see the sights of the city.

In 1825, he wrote and published 'Memoirs of the Life of Richard Brinsley Sheridan' which established his reputation in the writing world. He later settled in Sloperton Cottage, Wiltshire, England. He performed for the future Queen Victoria in 1830, the song, 'Sovereign Woman' which was his composition.

Thomas Moore married Elizabeth Dyke, 'Bessy,' an actress whom he had met during his performances with the Kilkenny Players. She was the daughter of an official of the East India Company. The two had five children, Thomas Lansdowne, John Russel, Anne, Olivia and Anastasia Mary.

Thomas Moore died at his home in Sloperton in 1852 where he was laid to rest.