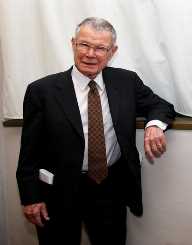 Thomas Schelling is an American economist, journalist, and educator who worked in the government and has received numerous awards for his works most especially on game-theory analysis. He is also a full-fledged author and has a number of works published under his names such as The Strategy of Conflict which was published in 1960, the 1966 release of Arms and Influences, and Micromotives and Macrobehavior in 1978. He died in Bethesda, Maryland from suffering from complications on a hip fracture on December 13, 2016, at the age of 95.

He married two women in the course of his life. His first marriage was to Corinne Tigay Saposs in 1947. Their marriage brought forth four sons but ended in 1991 after being married for 44 years. He was married a second time in the late half of 1991 to Alice M. Coleman.

Schelling was born in Oakland, California as Thomas Crombie Schelling on April 14, 1921. He attended high school at San Diego High and proceeded to enroll at the University of California to pursue a degree in economics. He graduated from university in 1944 and took his education a notch up by taking a postgraduate doctoral degree in economics at Harvard University. He attained his Ph.D. in  1951.

While he was taking up his undergraduate in Harvard, he started working for the government at the White House, alongside the Marshall Plan in Europe, and at the Executive Office of the President from 1948 until 1953. After his service to the government, he found employment at Yale University and joined the economics faculty.

In 1958, Schelling returned to Harvard not as a student but as an instructor. He took a post as an economics professor and became one of the founders of the Center for International Affairs the same year. Later on, the center was renamed as the Weatherhead Center for International Affairs. A decade and a year later, he became one of the co-founders of Kennedy School, shortly after joining Harvard's John F. Kennedy School of Government in 1969.

After working in Harvard for 21 years, he left the job in 1990 to join the faculty department of the University of Maryland Department of Economics and the University of Maryland School of Public Policy. A year later in 1991, he became the president of the American Economic Association and was also named a Distinguished Fellow for his works. 5 years later, he was elected as the Eastern  Economics Association's President in 1995.

In 1977, Schelling was awarded the prestigious Frank E. Seidman Distinguished Award in Political Economy. He was also the recipient of the Award for Behavior Research Relevant to the Prevention of Nuclear War in 1993 as awarded by the National Academy of Sciences.

Along with Robert Aumann, he received the Nobel Memorial Prize in Economic Sciences in 2005 for his uptake and work on game-theory analysis.