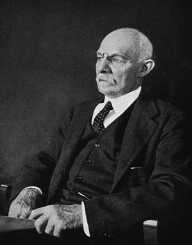 Theodor Kocher was a renowned Swiss surgeon and doctor. He was also a Nobel Prize winner for his successful work in surgery, pathology and also physiology. He became the first person of Swiss citizenship ever to receive a Nobel Prize. He was the pioneer of the abdomen, thyroid glands, and hernia surgeries. His greatest influence was from Joseph Lister who was the founder of antiseptic surgery.

Theodor Kocher later came to emulate him and was quite successful. He earned the 1909 Nobel Prize for his successful work in thyroid and goiter treatments through surgery. He became a great influence to many surgeons, physicians among others.

Theodor Kocher was born on August 25th, 1841. His place of birth was in Bern in Switzerland. His father was Jakob Alexander Kocher. He was a railway engineer born in 1814 and died in 1893. His mother was Maria Kocher. She was a very religious woman. She was born in 1820 and died in 1900. Kocher had four brothers and one sister. He was the second son of his parents.

Theodor Kocher attended University in Berne after he completed his early education. He later graduated in with a doctorate in 1865. He then studied under Langenbeck then Billroth and later Lücke. This was while studying in Berlin, Vienna, Paris, and London.  His teacher Billroth influenced him the most.

In 1965 Theodor Kocher traveled to Zürich along with Biermer, his teacher. He met with the director at the hospital, Theodor Billroth who later came to be a great influence on Kocher. By 1866 he had published his first works on hemostasis experiments. He did this while serving as an assistant professor in a surgical clinic located in Berne. In 1872 he replaced Albert Lucke as the professor in the clinic after he died.

He then went on with his research on goiter surgeries and published his findings between 1872 and 1874. He conducted experiments on goiter operations and was quite successful. Only a few deaths were reported. He, therefore, went on with other 101 surgeries upon which he published a book on the same in 1883.

Theodor Kocher explained in detail about the operation of goiter in his book. By then he had become an expert in goiter in any part of the body. In the surgeries, he performed resulted in only 30 malaises complications out of 100. Kocher went on with further research on the causes of the complications at the same time performing other surgeries on goiter.

By 1889 he had completed his report on the 250 surgeries he had performed. Theodor Kocher was the pioneer of inucloatin resection, which was one of his operation methods. This method is currently used in the treatment of nodular goiters in the whole world.

His work earned him the 1909 Nobel Prize. This was for his work in medicine. Theodor Kocher had performed over 2000 surgeries by the end of 1912. He also made history by becoming the first surgeon to perform over 5000 surgeries. He was the father of modern surgery.

Theodor Kocher wedded Marie Witchi. Together they had three sons. Albert, his eldest son, followed his footsteps. He grew up to be an assistant professor in the field of surgery. He even assisted Kocher.