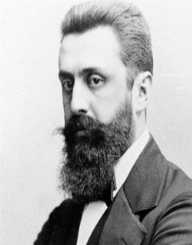 Theodor Herzl was born on 2nd May 1860, to Jakob and Jeanette Herzl. He was born in the Jewish quarter of Pest, in the Kingdom of Hungary, which was part of the Austrian Empire at the time. His father was an extremely successful businessman. Herzl had a sister who was one year older, Pauline, who died in 1878 from typhus.

Although Herzl initially was inspired by Ferdinand de Lesseps who built the Suez Canal, he didn’t have a head for science, and instead, developed a keen interest in poetry and humanities.

After Pauline’s death, the family moved to Vienna in Austria-Hungary. Herzl attended the University of Vienna, and he studied law.

Theodor Herzl had a short legal career in Vienna and Salzburg but then moved into journalism and literature. He was initially a journalist for a Viennese newspaper, and at the same time was a correspondent for Neue Freje Presse in Paris. He would occasionally travel to London and Istanbul for his work.

Herzl then became literary editor of Neue Freje Presse. He also wrote stage productions, both drama and comedy for the Viennese stage. As a correspondent for Neue Freje Presse, Herzl closely followed the Dreyfus affair. It was a political scandal that ran from 1894 to 1906 and involved a Jewish French army captain who was convicted incorrectly for spying on behalf of Germany.

There were mass rallies in Paris about the trial, and it is thought these may have had an impact on Herzl and his conversion to Zionism, although it is not proven they did, and there are several different schools of thought on the matter.

Theodor Herzl wrote The State of the Jews, which was released in February 1896. It received much acclaim, but also a lot of controversies. Herzl believed the Jewish people in Europe could leave if they wanted to and go to Argentina, or better still, to Palestine which was their traditional homeland. He argued that the Jews had a nationality, they just needed their own country.

He believed the Jews needed their own country to be able to practice their religion without vilification and express their culture. Herzl began to promote his ideas and gathered more and more supporters, both Jewish and non-Jewish. In 1896 he sought an audience with Sultan Abdulhamid II in Istanbul to present his case, but the audience was not granted. Undeterred, Herzl met with several highly-placed people under the pretext of his work as a correspondent.

One such person was the Grand Vizier, and Theodor Herzl put forward the case that if the Jewish people were given a homeland under Turkish rule, they would pay Turkey’s foreign debt and help regulate their finances. In 1901, Herzl finally gained an audience with Sultan Abdulhamid II, but his proposal was refused.

In July 1896, Herzl spoke to a rally of thousands of people in London, mostly Yiddish speaking Jewish immigrants, and they acclaimed Herzl as the leader of the Zionist movement. The movement continued to grow at a rapid rate.

In 1897, Theodor Herzl established Die Welt, a Zionist newspaper which he ran from Vienna. He held the First Zionist Congress in Basel Switzerland, and he was elected president of the Congress. Herzl held the position until his death. In 1898, Herzl began to organize and take part in diplomatic initiatives that would continue to build support for the Jewish people to have their own country. It was that same year the Herzl visited Jerusalem for the first time.

During 1902 and 1903, Herzl gave evidence at a British Royal Commission on Alien Immigration. He also negotiated a charter with the Egyptian government for the settlement of the Jews in Al ‘Arish, on the Sinai Peninsula. In 1903, Palestine offered safe refuge to the Jews fleeing persecution in Russia. The Catholic church would not endorse them though, and Jews were murdered and injured in Kishinev.

In 1903 the British made an offer to settle the Jews in British East Africa, but the Zionist movement declined the offer and forged ahead, determined to settle their people in Palestine. Herzl had a vision of a Jewish state that mixed modern Jewish culture with the best of their European heritage.

Israel has an annual national holiday named Herzl Day, to commemorate Herzl’s vision and his life as a Zionist leader.

In 1889, Theodor Herzl married Julie Naschauer. They had three children, but the marriage was an unhappy one.

Herzl died on 3rd July 1904, and although he never saw his Jewish state come to fruition, he is known as the Father of the State of Israel.