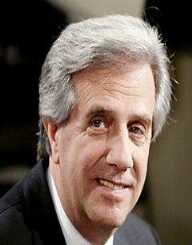 Also Known For : President Of Uruguay

Tabare Vazquez, an oncologist by profession, is the president of Uruguay born on January 17th, 1940. He was first sworn in as the 39th president of Uruguay in 2005 and ruled till 2010. He was later re-elected to the position in 2015 replacing Josè Mujic. He was initially an oncologist before joining politics. The great politician is best remembered for his efforts in eradicating poverty. During his time as president, he has also brought other reforms in the health and education sectors. To him, all people should receive equal opportunities. The noble president has earned many awards in his career.

The Uruguayan president Tabare Vazquez was born on January 17th, 1940. His place of birth was in the capital city of Uruguay, Montevideo.

He attended the medical school of Universidad de la República after his early education. He studied medicine where he specialized in oncology. By 1972 he was through with his studies and graduated.

In 1976, the government of France offered him a scholarship. This was a great opportunity for Vazquez to further his education. He gained admission at Gustave Roussy Institute. It is situated in Paris.

Tabare Vazquez first came into power as the Uruguayan president in 2005. This was after emerging victorious in the 2004 elections held on 31st October. He won the elections quite successfully hence a runoff was not necessary. During this time in power, he had great support from the head of sates including Brazil. This eased his duties given that he was still new in power.

With the power invested in Tabare Vazquez, he brought about many reforms in his country. He kicked off by putting in place a policy that ensured personal income tax was set at a universal rate. On top of it, it reduced the value tax added to the income tax. This policy was the Impuesto a la Renta de las Personas Fisica. In short, it is termed as I.R.P.F. Reform or Income Tax on Natural Persons. The noble leader greatly advocated for social justice for his people.

Tabare Vazquez initially had a smooth ruling as president. However, he later encountered a few challenges. He collided with Argentina’s government over Uruguayan pulp factories. The government of Argentina claimed that these factories caused great pollution to the Uruguay River.

In 2007, an Uruguayan Navy was found in a controversial situation. This was after Iranian weapons were found in their possession. His time in power came to an end on March 1st, 2010. Josè Mujica then took over and became the president. He was later re-elected as president in 2015.

Tabare Vazquez has proved to be a great leader of his country. This is with the positive reforms he has enacted his country within a short period. He has therefore earned great respect and awards during this time in power.

He was awarded the Director General's Award in 20006. The World Health Organization awarded this. In 2007, he was ones again awarded the Order of Merit. He received the award from the government of Qatar. Later in 2010, he was presented with the Grand Collar of the National Order of San Lorenzo. This was from the Ecuadorian government.

Tabare Vazquez has a wife, three biological children, and one adopted son. His wife is the first lady of María Delgado. His three children are Ignacio, Álvaro, and Javier. His adopted son, on the other hand, is Fabián