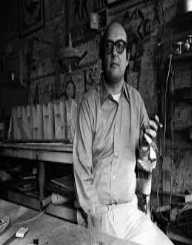 Solomon ‘Sol’ LeWitt was born on September 9, 1928. He was an American artist. He was a member of movements such as Minimalism and Conceptual Art. He died on April 8, 2007, at the age of seventy eight.

Solomon ‘Sol’ LeWitt was born on September 9, 1928, in Hartford in Connecticut, United States of America. He was born to Jewish immigrants who were from Russia. He attended Wadsworth Athenaeum, Hartford where he took art classes. In 1949, he obtained a BFA from Syracuse University. He later travelled to Europe where he got exposed to Old Master paintings.

He later joined the United States Army and served in the Korean War. He also served in Japan and California. In 1953, he moved to New York where he established a studio. He later joined the School of Visual Arts where he continued pursuing art. At the same time, he worked with ‘Seventeen’ Magazine. In 1955, he was hired as a graphic designer by Architect I.M. Pei. In 1960, he started working as a night receptionist and clerk at the Museum of Modern Art in New York City.

Sol Lewitt later became friends with Eva Hesse, Robert Smithson, and Hanne Darboven. In the 1960s, he was a teacher in institutions such as The School of Visual Arts and New York University. In 1980, he travelled to Italy. He later returned to the United States and lived in Chester in Connecticut. To date, he is known and acknowledged as one of the founders of Minimal and Conceptual art.

His work ranges from wall drawings to structures in the form of pyramids, towers, geometric forms, and progressions and two to three-dimensional works. In 1964, he first exhibited his work at the Kaymar Gallery in New York. Two years later, he was part of the ‘Primary Structures’ exhibit at the Jewish Museum, New York. In 1970, he exhibited his work at the Gemeente Museum at The Hague.

In 1978, his work was exhibited at the Museum of Modern Art in Oxford. His work was later on exhibited in many museums and galleries. He was represented by galleries such as Paula Cooper Gallery, Lisson Gallery, Donald Young Gallery and Yvon Lambert Gallery which were in different parts of the World.

In his lifetime Sol Lewitt did not get married since he was so committed to his work. He died of cancer complications on April 8, 2007, in New York at the age of seventy eight.