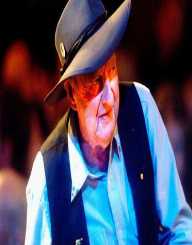 Slim Dusty was born 13th June 1927, in New South Wales, Australia. He was born in a little country town, called Nulla Nulla, which is near Kempsey. Slim Dusty, who was known by his middle name, Gordon, was the son of a cattle farmer.

He was just ten years old when he wrote his first song, The Way the Cowboy Dies, and at just 11 years of age, he adopted his stage name, Slim Dusty.

In 1954, Slim Dusty went into a full-time show business career with his wife, Joy McKean. They started the Slim Dusty Travelling Show, which performed all over Australia.

McKean wrote numerous songs that became popular ballads for Slim Dusty Some of these included, The Angel of Goulburn Hill, Walk a Country Mile, and Indian Pacific. McKean managed Dusty for over 50 years, in what would be an extraordinary partnership in both business and personal life.

With the advent of rock and roll music in the late 50s, leading into the 60s, country music was all but abandoned by the commercial radio stations. This makes Dusty’s popularity even more extraordinary.

Even though Slim Dusty was a very talented songwriter himself, he would also use the services of songwriters like Stan Coster, Gordon Parsons, Mack Cormack, and Kelly Dixon. It was a song by Parsons that would become Slim Dusty’s signature song.

Slim Dusty published his autobiography in 1979. It was titled Walk a Country Mile and became a bestseller in Australia. He also released an album with the same name, which went platinum.

Slim Dusty stayed with the one recording company, EMI, throughout his entire career. In the year 2000, he reached the milestone of 100 albums. In 2003, at the time of his passing, Slim Dusty was in the process of recording his 106th album. It was released posthumously, and went to the first position on the country music charts, achieving Gold Record status.

The most famous of Dusty’s songs was A Pub with No Beer, written by Gordon Parsons. When Slim Dusty was honored with a State funeral, attended by both the Prime Minister of Australia and the Opposition Leader, the song was sung as part of the service.

Slim Dusty has been heralded with achieving several ‘firsts.’

When Slim Dusty recorded his 100th album in 2000, he became the first recording artist globally to achieve the milestone. He was followed at a later date by Cliff Richard.

He is also the only artist in history to record on every major medium – 78 rpm, vinyl LPs, cassettes, CDs, VHS video, DVD, and iTunes.

Slim Dusty has too many awards to mention individually – 39 Golden Guitar Awards (Country Music Awards in Australia), and more Gold and Platinum Records (over 70) than any other Australian artist.

Some of his notable honors include:

Slim Dusty was voted by the Australian public as an “Australian National Treasure” – a list of around 100 people that the population acknowledges as having made outstanding contributions in any field of human endeavor, in Australian society.

Slim Dusty has appeared on both Australian stamps and coins. He has had a movie made about his life, called The Slim Dusty Movie, and also appeared on This is Your Life twice.

He has had a rose named in his honor and has also had The Slim Dusty Centre built in Kempsey, New South Wales, which opened in 2015.

His largest legacy though is the music that he recorded over more than five decades, which is forever available to the public for their enjoyment.

Slim Dusty was a true gentleman, and will always remain an icon of Australian history.