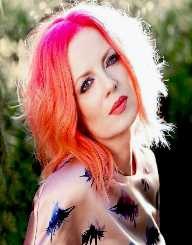 When it comes to singing with attitude, few people come close to Shirley Manson. She is the lead vocalist of the band Garbage. Shirley Manson is mostly noted for her rebellious singing and dark themes, with which she manages to enchant the crowd. Her most famous songs include Only Happy When It Rains, Vow and Stupid Girl.

Shirley Manson was born as Shirley Ann Mansion to John Mansion, a professor, and Muriel Mansion, a vocalist. She was born in Edinburgh, Scotland, United Kingdom. She has two sisters and is the second child of her parents. Her musical talents came as a gift from her mother, and at the early age of 7, she began playing violin and clarinet. She also showed an interest in learning ballet.

She was a victim of heavy bullying in her school, and she developed a habit of damaging herself with a sharp object to overcome the pain. It also transformed her into a rebel, who missed classes regularly, while attending the City of Edinburgh Music School. This saved her from bullying though but brought in other bad habits such as smoking drugs.

After dropping out of school, Shirley Manson pursued a career in the music industry. After a few struggles early on, she became a member of Garbage and produced some of her most famous works. Her solo career in music did not take off, but she earned modeling and acting roles.

Just after college, Shirley Manson joined the band Autumn as their lead singer. Not getting enough success, she associated herself with the Wild Indians. She had to work in a store to make ends meet, where she was transferred to the stockroom due to her bad attitude towards customers.

Success came at her doorsteps in 1984, when she was spotted by a member of the band Goodbye Mr. Mackenzie. She became a backup singer for the band and stayed with them till 1992.

In 1993, Shirley Manson was noticed by Butch Vig, drummer for the Garbage in a song Suffocate Me. After two auditions she got the position of the lead vocalist in the band. Their first album titled Garbage went double platinum. Mansion sang several hit songs in this album including Only Happy When It Rains, and Vow.

The band followed their success with another major hit album, but their third album was not very successful. Internal feuds between artists led the band to a hiatus. In the meantime, Mansion tried for a career as a solo artist, but her songs were rejected. Shirley Manson contributed to the music in the 1999 James Bond film; The World is Not Enough.

Garbage reunited briefly in 2005, long enough to produce another album Bleed With Me. This album was widely praised, but the band again went on a hiatus.

Mansion started receiving acting roles in this period, with one of her most famous roles being that of Catherine Weaver, a cyborg in Terminator: The Sarah Connor Chronicles.

In 2012, Garbage reunited again, and they recorded another album Not Your Kind of People. The album received positive responses. Shirley Manson has then been involved in several shows and charity programs.

Shirley Manson is an ambassador for the M.A.C. Aids Funds. She has also posed on an international poster for PETA Europe.

Shirley Manson has adopted a rescued dog, a terrier named Veela. She is also associated with the Pablove Foundation, a charity for cancer patients.

Shirley Manson has been married twice. Her first marriage was to actor Eddie Farell in 1996. They divorced in 2003. She then married the sound engineer of her band Garbage in 2010. They live in Los Feliz and have no children.

Shirley Manson is a feminist at heart. She considers herself spiritual but does not believe in organized religion.