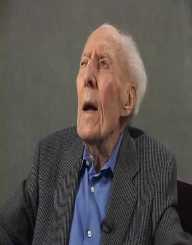 Sherwood Charles Schwartz was born 14th November 1916, to Herman and Rose Schwartz. He was born in Passaic, New Jersey, in the United States. He had two brothers, one older, one younger, who both became writers as well.

While studying for his Master of Science in Biology degree, Schwartz began writing jokes for Bob Hope’s radio show. His older brother Al worked on the show, which was a great inroad for Schwartz to get some casual employment to help pay the bills while he studied.

Hope loved the jokes as they went down very well with his audiences, so he offered Schwartz a position on his writing staff, which Schwartz accepted. He was with the Bob Hope show from 1938 to 1942.

Schwartz wrote for several radio shows, including The Adventures of Ozzie and Harriet, and the Armed Forces Radio Network.

From there, he moved into television. He wrote, created and produced several programs on television, including Gilligan’s Island and The Brady Bunch. These two programs have gone down in history as two of the most well-known, well-loved shows to have been aired on television.

Both Gilligan’s Island and The Brady Bunch were syndicated, and they became household names all over the world.

Schwartz also appeared in later years on various talk shows to discuss his different shows and career. These included CBS Evening News, 20/20, and Biography on A&E.

Schwartz launched a stage production, Rockers, on 10th November 2006. He had also begun writing Gilligan’s Island: The Musical. Although in production, it has never been performed live on stage.

Schwartz has the following among his awards and honors:

2008:   Inducted into the Television Hall of Fame

2008: Awarded a star on the Hollywood Walk of Fame

Schwartz married Mildred Seidman in 1941. The couple had four children, three sons, and a daughter.

On 12th July 2011, Schwartz died peacefully in his sleep of natural causes.