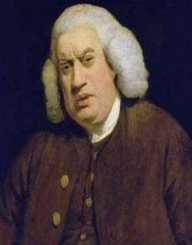 Samuel Johnson was an English writer who made his name through his poems, biographies, essays and literary critics. He is known to have been a dedicated Anglican who is remembered for his philanthropic activities.

Samuel Johnson was born on 18th September 1709 in Litchfield. His came from a humble background to became one of the greatest figures of literature. The obstacles he had to overcome helped Johnson to build his success.

As a toddler, Johnson was plagued by various health problems. In one of the biographies written by his friend, Johnson indicated that after his birth he took some time to cry.

He later diagnosed with scrofula, a condition that affected his lymph nodes. This condition affected Johnson's hearing and seeing abilities. His father's huge debts were a major concern in Johnson's life.

At the age of four, Samuel Johnson started school at a nearby school; Johnson later enrolled in Litchfield Grammar School, where he passed highly in Latin. At the age of 9, he was promoted to upper school.

Johnson's father was a bookseller a factor that contributed to his excellent performance in school. Johnson went to Pembroke College in Oxford in1728.  He was, however, unable to continue with his studies because he could not raise the school fees.

His quest for education forced him to look for a job to raise his school fees. He found a short-term job as a teacher. Johnson's attempt to form his school in 1735 failed.

Having moved to London, Samuel Johnson worked as an article writer in 1737. One year later he started working in The Gentlemen's Magazine. Later that year he wrote a political satire that was received well by the public.

One of his biggest jobs was A Dictionary of the English Language, a project that took almost ten years before completion. His dictionary was published in 1755; the project, however, brought Johnson little financial gains.

A pension he received from the English government in 1762 came as a relief for his difficult Economic times.

Samuel Johnson got involved with his friend Porter's wife after his friend's death in 1734.  Despite their age difference and the opposition by his local religious leaders, the two went on to have a romantic relationship.

Elizabeth had three children with her previous husband. The widow had a substantial amount of savings and had promised to help Samuel Johnson out of his financial woes.

The two finally got married on July 9th, 1735; their wedding was conducted at St Warburg Church. Johnson's family never approved the marriage because of their age difference. Johnson was 25 and Elizabeth was 46.

Two of Elizabeth's children accepted the marriage. Jervis, her firstborn son, declined to recognize Johnson as his father.

Samuel Johnson stopped living with his wife from 1737, with the guilt that he depended too much on his wife’s finances to survive.

From his childhood, Samuel Johnson had various health problems. His posthumous condition had not been diagnosed in the 18th century. After facing a series of health challenges, John succumbed to his death on December 13th,1784. His body was laid to rest in Westminster Abbey.

His literary works have left a lasting legacy, many claiming that Johnson was the last true critic of English literature.