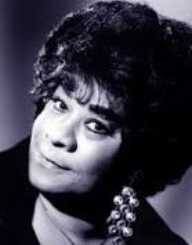 Ruth Alston Weston was born 12th January 1928, in Portsmouth, Virginia, in the United States. She came from a large family, with six siblings. She studied at I.C. Norcom High School, which was segregated at the time.

Brown was a mischievous teenager, and without her parents’ knowledge, she used to sing at the United Service Organizations Inc (USO). The USO provides live entertainment for servicemen and their families. While she was performing, she met Jimmy Brown, a musician. The two ran away in 1945 when Brown was 17, and shortly after they got married. Unknown to Brown, her new husband was already married.

Although the marriage didn’t last, Ruth Brown kept her new surname because she had started to make a name for herself in the music industry.

A fellow singer, Blanche Calloway, organized a gig for Brown at a nightclub in Washington, D.C., called Crystal Caverns. Calloway soon became Brown’s manager. She was quickly brought to the attention of Atlantic Records, who signed a contract with her. Atlantic organized a debut concert for Brown at the Apollo Theater in New York City, but on her way to New York, Brown was in a serious car accident which saw her in a hospital for nine months.

In 1948, the managers of Atlantic Records, Ahmet Ertegun, and Herb Abramson, drove to Washington, D.C. to hear Brown sing. Ertegun convinced Brown to change her genre to rhythm and blues. Her first hit was So Long in 1949. Brown followed up with another hit in 1950, called, Teardrops from My Eyes.

Ruth Brown continued to release songs over the next few years, and was consistently in the charts, with five number one hits to her name. Between 1949 and 1955, Brown had 21 songs that made top 10 in the charts.

Brown also crossed over from R&B to pop, with a song called, Lucky Lips in 1957. It peaked at number six on the R&B chart and number 25 on the U.S. pop chart. She had a follow-up singled the following year, called This Little Girl’s Gone Rockin’.

In the 1960s, Brown stopped performing as her career began to wane. Atlantic Records didn’t renew her contract, and she was left to work odd jobs to make ends meet.

Ruth Brown's comeback was in 1975. Comedian Redd Foxx encouraged Brown to return to singing, and she took several acting roles that included singing as well. These included roles in the film Hairspray and Broadway productions called Amen Corner and Black and Blue.

In 1995, Brown released her autobiography, Miss Rhythm, which won the Gleason Award for music journalism.

On 17th November 2006, Ruth Brown died at the age of 78. Cause of death was complications from a heart attack and stroke she had suffered in October 2006.

Ruth Brown's awards include: 1985: Tony Award (for her performance in the Broadway musical, Black, and Blue)
1989: Grammy Award for Best Jazz Vocal Performance
1993: Inducted into the Rock and Roll Hall of Fame

Ruth Brown's second marriage was to Earl Swanson, another musician, but the marriage only lasted a very short time.

Brown had a son, Ronnie McPhatter, born in 1954 from her relationship with Clyde McPhatter.

In 1987, thanks to Brown’s endeavors fighting for musicians’ rights and payment of royalties, the Rhythm and Blues Foundation was established.