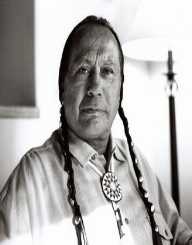 Russell Charles Means is one of the America Natives that was born in the year 1939 on November 10th. Also, he was an activist for the rights of Oglala Lakota people and the American Natives in General. Apart from all that he was also a writer, actor, musician, and political activist. In his lifetime he was one of the major players in the American Indian Movement (AIM). In his role as a member of the AIM Russell brought the attention of the media to the problems of his people.

Therefore, Russell helped in attaining the attention of the nation and the whole world. Furthermore, he was also attentive to international matters affecting different native people all over the world. So, he got to work with organizations like the United Nations to further his agenda. Later in life, he got into acting where he also excelled. Sometimes after that he got to make his music. Russell Charles Means passed on in the year 1995 just one month shy away from his 73rd birthday.

Russell Charles Means was born on the 10th of November 1939 in Porcupine, South Dakota on the ridge of the Pine Ridge Indian Reservation. Also, Russell was born to his father Theodora Louise Feather and Walter Hank Means. Russell had five other siblings, two boys, and three girls. During his younger days, his mother gave him the name Wanbi Ohitika to mean the brave one. Due to the poverty level in the reservation, Russell's father took up a job a shipyard in San Francisco Bay.

So, they had to move there to be close to their father. So, he grew up in the San Francisco Bay area. In the year 1967, Russell’s father passed on. By then he was only 20 years of age. So, he went back to live in the Indian reservations looking for odd jobs. Sometime later he contracted vertigo. Also, the Reservation doctors were not fast enough to administer proper treatment or diagnosis.

Later in life, he would be found with an ear infection that almost cost him his ear. Russell then took up a job with the Office of Economic Opportunity after his recovery. Through his career, Russell got to meet so many legal activists and learned from them. After that, Russell disagreed with his boss and quit his job. So, Russell went to Cleveland Ohio. There, he got the opportunity to work with Native Americans on the matter concerning their civil rights.

In his younger days, Russell went to school in the San Francisco Bay area. Later he was able to join the San Leandro High School in San Leandro in California. In his life, Russell went to four colleges. However, he did not manage to graduate from even one of them. At one point in life, he fell into the life of truancy. So, he abused drugs and alcohol just like the father who used to be harsh.

The year 1968 saw Russell joining the American Indian Movement. Just within a few years, Russell was already an essential member of the group. Also, in the year 1970, Russell got the promotion from the group as its national director. During Russell's tenure, he made sure there was an increase in the number of activism and protests. Some of the significant rallies in his life were the first one in Boston in 1970. This was only a few months after attaining the leadership of the AIM. Russell aimed to make sure that the other people were made aware of the mistreatment of the native people. So, later he went on to lead more protest of the same caliber to ensure he got equal rights for his people.

After serving at the helm of AIM for almost four years, Russell resigned from the job. However, he chose to run for the presidency of the Oglala Sioux Tribe. He lost to the incumbent President of the tribe Richard Wilson. However, there was a clear sign of malpractice in the electoral process. Some of the natives claimed that Wilson had his goons intimidating residents. However, after a fierce court battle, a federal court upheld the result of Richard Wilson. So, Russell made his peace and turned to the international community for help towards the proper welfare of his people.

Russell was also an actor and a writer in his lifetime. As an actor, he debuted in several films plus television movies. Amongst some of the work he did as an actor is The last of the Mohicans, The Pathfinder (1996), Natural Born Killers(1994) Windrunner(1994) and Buffalo Girls) among many others. The best of his movies was as the voice of Chief Powhatan in the Disney movie Pocahontas.

Furthermore, he had time to write his autobiography by the name Where White Men Fear to Tread. In his book, he shows how the family had a lot of hardship growing up with a harsh father. Russell's autobiography drew the attention of Patricia who wrote another book based on it: It’s American Story- wart, wounds and all.

Russell Charles Means got a diagnosis from his doctor that he had esophageal cancer. Moreover, they were unable to operate on it. So, Russell went ahead to reject mainstream medicine to use the traditional ones. He survived for some time, but his illness finally caught up with him. So, on October, 23rd 2012 he passed away. He was only one month shy of his 73rd birthday when he died. Russell’s family said upon his death that, “Our dad and husband now walks among our ancestors.”