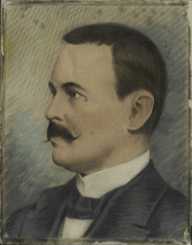 Nobel laureate Ronald Ross was born in Almora, India on the 13 May 1857. His father was Sir Campbell Claye Grant Ross who was serving as a general in the British Indian Army at the time of his son’s birth. Ross’s mother was Matilda Charlotte Elderton, and he was one of ten children.

Ronald Ross was sent to England for his education and was a pupil at Ryde Primary School on the Isle of Wight. He then attended boarding school in Southampton where he completed his high school years. He studied medicine at St Bartholomew’s Hospital College in London (1874-1879)

In 1879 he passed the Royal College of Surgeons London examinations. He then studied for the Licentiate of the Society of Apothecaries for four months (1881) which meant that he could join the Indian Medical Service. During the late 1880s, he took study leave and returned to London study a Diploma in Public Health (June 1888 until May 1889). It was at this time that he did a course in bacteriology while studying under Professor E.E. Klein.

It was in India in 1892 that Ronald Ross turned his attention to malaria. On a trip back to England in 1894, Dr. Patrick Mason convinced Ross that malaria parasites attacked via the bloodstream. When he returned to India in 1895, he set about trying to prove Manson’s theory that mosquitoes are connected to the propagation of malaria. The Indian Government subsequently gave him a year’s special duty leave to do this research. It was in Secunderabad in August 1897 that Ross made his discovery. Dissecting the stomach of an anopheline mosquito fed a few days previously on the blood of a patient with malaria, he found the malaria parasite.

He, therefore, succeeded in establishing the hypothesis of Manson by demonstrating the life-cycle of malaria-causing parasites in mosquitoes. He continued his research in India into malaria; then in 1899, he resigned from the Indian Medical Service.

Ronald Ross returned to England and took up a position at the Liverpool School of Tropical Medicine as a lecturer. In 1901 he became a Fellow of the Royal College of Surgeons of England as well as a Fellow of the Royal Society. Then in 1902, he was awarded the Nobel Prize in Medicine for his work on malaria. He was made Professor of Tropical Medicine at Liverpool University in 1903. His work involved looking into problems with malaria in West Africa and how to overcome them.

Ronald Ross remained as Professor of Tropical Medicine at Liverpool University until 1912. He was made Physician for Tropical Diseases at King’s College Hospital in London while at the same time holding the Chair of Tropical Sanitation in Liverpool. In 1917, during World War I, he Consultant in Malariology to the UK War Office. Malaria was a major problem facing the army combatant troops. After the war, he became Consultant in Malaria to the Ministry of Pensions. In 1926 he was appointed Director in Chief of the Ross Institute and Hospital for Tropical Diseases and Hygiene. He also became the President of the Society of Tropical Medicine. He held both positions until his death.

Ronald Ross won the Nobel Prize in Medicine in 1902 for his research into malaria, the first British person to win the prize. He was also appointed a Companion of the Most Honourable Order of Bath in 1902.

The Karolinska Institute in Stockholm presented him with an honorary medical degree in 1910. Belgium made him an Officer of the Order of Leopold II in 1911.

For his work during World War I into the malaria epidemic facing combatant troops, Ross was awarded the rank of Knight Commander, St Michael and St George (1918).

Sir Ronald Ross Institute of Parasitology, a research institute in Hyderabad, India is named in his honor.

In 2013 Liverpool University formally opened the Ronald Ross building at the Institute of Infection and Global Health in Liverpool, England.

His research was the first to demonstrate Mason hypothesis that malaria is transmitted to man by the Anopheles mosquitoes.

Ronald Ross set up many malaria prevention organizations in India and Ceylon. He made numerous contributions to the study of malaria including his report The Prevention of Malaria (1911) and scientific papers published by the Royal Society. Much of his work in epidemiology led to a greater understanding of insect-borne diseases.

Ronald Ross married Rosa Bloxham in 1889, and she went with him Bangalore, India when he returned to his position as staff surgeon. The couple had two sons: Ronald and Charles and two daughters: Dorothy and Sylvia. His wife died in 1931.

Ronald Ross died at the Ross Institute London on the 16 September 1932.

Before deciding on studying medicine, Ronald Ross had been interested in a career in the arts, and he was also a poet.