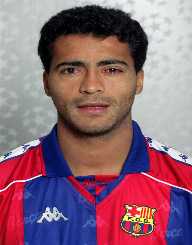 Born January 29th, 1966 in Brazil, Romário is renowned as a Brazilian politician who has previously achieved worldwide fame through his professional football career. The award-winning footballer had an outstanding career, winning numerous finals and gaining multiple awards including a mention in the FIFA 100 list of the world's greatest living players, back in 2004.

Romário grew up in a small Rio de Janeiro suburb where he was known for playing football for the small club Olaria. Noticed for his exceptional skill, he was signed by Vasco da Gama, a junior team where he proceeded to win two state leagues and earned his first requests for national team entry.  From there, Romário gained a vast amount of recognition when he was given the title of top scorer in the 1988 Olympic football tournament.

Throughout his life, Romário has had three wives, the last of which was Isabelle Bittencourt. They were married in 2002 and had two children, Romarinho and Isabellinha Faria.

Shortly after this Olympic success, Romário transferred to PSV Eindhoven where he went on to win the Eredivisie in 1989, 1991 and 1992. In the five seasons he played at PSV, Romário scored 165 goals in the 167 matches he appeared in. He was renowned for his laid-back persona and unbelievable self-confidence.

Romário moved to Spain, for just a few years, to become a part of Johan Cruyff's 'Dream Team.' Romário assisted the club in winning the coveted La Liga title and became the season's top goalscorer once again, scoring 30 goals across 33 matches. He also helped the team reach the 1993-94 UEFA Champions League final. In this match, the team dramatically lost 0-4 against rivals, Milan. There are many highlights in Romário's career at Barcelona, including the incredible hat-trick which lead to a final score of 5-0 against Real Madrid in the El Clásico tournament.

Romário returned to play for Brazil in 1995, remaining there for five years. During this time, he crossed the Atlantic several times to play for Valencia in Spain but was loaned back to Flamengo after disagreements with the head coach at the time. This happened again, leaving  Romário to return to Flamengo for good having played six league matches for Spain in total.

Romário joined Vasco in 2000 and helped the team to reach the 2000 FIFA Club World Championship. At 34, Romário witnessed the best season of his career to date when he won the Copa Mercosur and the Brazilian league title while playing for Vasco. For his performance, Romário was awarded both the South American and the Brazilian Footballer of the Year awards. He also finished both 2000 and 2011 as Brazil's top goalscorer.

From 2002 to 2004, Romário signed with Fluminense. During this time, in 2003, he signed a three month contract with Qatar, returning to Fluminense after not scoring a single goal. In 2004, Romário was fired from Fluminense after falling out with the coach and attacking a fan during a training session, forcing him to return to Vasco. In 2005, Romário had scored 22 goals in the Brazilian Championship, making him the league's top goalscorer for the third time.

Romário announced his retirement on February 5th, 2008 from both playing and coaching. The move was surprising to many. After a couple of months, on April 15th, he re-announced at the launch of his DVD that he would fully retire due to weight issues. In August 2009, Romário made his comeback, to fulfill one of his father's wishes and played for America in the Carioca Championship.

During the 2010 general election, Romário was elected to join the Chamber of Deputies under the Brazilian Socialist Party. He is renowned as the sixth most voted candidate for deputy in Rio de Janeiro. Surprisingly, he forced his political agenda against the 2014 FIFA World Cup that was to be held in Brazil accusing the event with money laundering and corruption.

On February 19th, 2014, Romário announced his decision to run for the Brazilian Senate, confirming the decision in June. By October 5th, Romário had won the election. He received the most votes out of any candidate in Rio de Janeiro ever. He is also famous for his political agenda. This agenda, among other things, is renowned for working towards better rights for people with disabilities.

Romário celebrated many awards and achievements throughout his entire football and political career. Most notable, Romário was awarded the FIFA World Player of the Year – Silver Award in 1994. He is famous throughout the world as being one of the greatest strikers in football history. His most magnificent performance is considered to be his stunning work during the 1994 World Cup where he scored five goals during the competition, leading Brazil to their 4th World Cup victory.

Romário was also voted fifth in the FIFA Player of the Century internet poll in 1999.

Romário also holds the title for being one of the only players to have scored 1000 goals. This landmark goal was taken while playing for Vasco in 2007. This title is widely discussed as the total includes goals from youth and friendly matches. While still goals, these are not officially counted by FIFA.

During his football career, Romário appeared in a number of controversies. One of the first was in March 1990. Romário was already banned from three international competitions due to his knack for fighting with other players. During his time at PSV Eindhoven, it was a well-recorded fact that the rest of the team disliked him. He was renowned for missing training sessions, for which he was fined.

Throughout his career, he was infamous for arguing with coaches. This usually resulted in him leaving the team. One of the most famous of these incidents was when he played for Qatar. His conflict with head coach resulted in him being fired on October 21st, 2004.

Another infamous controversy was when Romário attacked a fan who had proceeded to throw six live chickens at him during a training session.

On December 4th, 2007, Romário released results that he had tested positive for Propecia. Also known as finasteride, he claimed this was from the anti-baldness treatment he had been undergoing. The substance is banned as it is renowned as a masking agent for steroids.

Romário was just as controversial in his political career as he was in his football. When Rio won the right to host the FIFA World Cup 2014, he denounced the event, stating it was filled with corruption. He also stated that the country had more pressing issues to address, rather than invest the money in a stadium.

Romário claimed the 2018 FIFA World Cup holding rights were stolen from England and sold to Russia. He believed this was part of the 2011 scandal by FIFA.