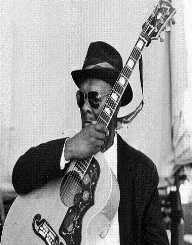 Robert Johnson is a singer for the Blues, active during 1936 and 37.

Robert Leroy Johnson was born on 8th in May 1911, in Hazlehurst, Mississippi. His father was Noah Johnson. His mother Julia Major Dodds had ten children before him. The family and Robert moved to Memphis. Julia’s husband, Charles Dodds was forced to leave Hazlehurst by a lynch mob. Charles Dodds changed his name to Charles Spencer in 1913.

Julia was married to a new husband Dusty Willis, and Robert joined her in Crittenden, Arkansas in 1919. He was registered to study at Tunica’s Indian Creek school in Commerce. In 1920, he was still Robert Spencer, living in Lucas, Arkansas with mother Julia and stepfather Dusty Willis. Robert apparently taught himself guitar, harmonica, Jew’s harp piano and pump organ.

In February 1929, Robert Johnson married sixteen-year-old Virginia Travis, who later died in childbirth. He fathered a child with Vergie Mae Smith while in Martinsville. Robert married Caletta Craft in May 1931. The couple moved to Clarksdale, Mississippi a year later. After Caletta died in childbirth, Robert became a walking musician.

Robert Johnson was twenty- seven years old when he died on August 16, 1938. The cause of his death was unknown, only that he died near Greenwood, Mississippi. Also, no one knows where Robert Johnson was buried. However, there are three markers made to remember him by. A one-tonne cenotaph was built in Mount Zion Missionary Baptist Church near Morgan City, a small marker with the epitaph “Resting in the Blues” at the cemetery of Payne Chapel, and a marker at Little Zion Church, north of Greenwood.

Robert Johnson’s career as an itinerant musician started after the death of his wife, Caletta in 1932. Robert Johnson moved between cities like Memphis, Tennessee, Arkansas, and the towns between the Mississippi Delta and Arkansas. Robert was sometimes accompanied by fellow Blues musician Johnny Shines or Henry Townsend. During his career as a walking musician, he adopted eight different surnames, mostly stayed with women whom he seduced. Some he formed long-term relationships, such as Estella Coleman.

In 1936 and 1937, Robert Johnson recorded twenty-nine songs with American Record Corporation. The selections included alternate takes, while Robert was reported to be performing the songs facing the wall. The speculation was that he was enhancing the sound of the guitar using the technique called corner loading. He was only alive to see Terraplane Blues and Last Fair Deal Gone Down being released. But Robert Johnson had managed to release eleven 78-rpm records with help from Vocalion Records.

Robert Johnson was rumored to have gained his guitar techniques by making a deal with the devil. The legend said that he made the deal at the crossroads of Highways 49 and 61, who re-tuned the guitar with Robert’s soul as payment. Robert Johnson appeared in Clarksdale weeks later with a new technique. His relatives attributed the death of his wives to the rumor.

Robert Johnson’s death was also shrouded in mystery; the most famous speculation was being poisoned to death. He was given a bottle of whiskey by a jealous boyfriend or husband, and he took three days to die. Other theories include Robert Johnson succumbed to syphilis.

After his death, Robert Johnson’s recordings became famous due to his skill with the guitar and his soulful voice. Twenty years later, he became the King of the Delta Blues Singers. His work influenced Blues and Rock and Roll, with many musicians striving to gain his guitar skill.

Sony Legacy re-released his recordings in 1990; The Complete Recordings is a double-disc boxed set. The record for Robert Johnson won a Grammy award that year.