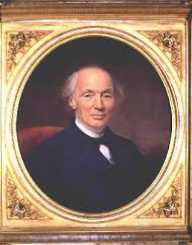 Robert Dale Owen was born in the city of Glasgow, Scotland, on November 7, 1801. He spent most of his childhood in the town of Braxfield. His father, Robert Owen, was a wealthy textile manufacturer. His mother’s name was Ann Caroline Dale. He had three brothers, named William, Richard, and David. He had three sisters, named Ann, Jane, and Mary.

Owen began his training with private tutors. At the age of sixteen, he moved to Hofwyl, Switzerland. There, he attended the boarding school of Philipp Emanuel von Fellenberg.

Owen’s father was a socialist who advocated for utopian communities. Owen followed in his father’s footsteps. He was an advocate for women’s rights, free schooling, government assistance, and the abolition of slavery. He abandoned Christianity and converted to Spiritualism.

After his graduation, Robert Dale Owen returned to the United Kingdom. He started working in the family textile company. In 1825, he moved to the United States and became an American citizen. He went to the town of New Harmony, Indiana. His father purchased the town and tried to turn it into a socialist community. Owen helped him manage the work.

He served as the head of the Roads and Canals Committee. He also helped in the founding of the Smithsonian Institution. From 1953 to 1958, he lived in Italy and served as ambassador to the Two Sicilies Kingdom in Naples. During the Civil War, he was part of the Ordnance Commission that supplied the Union army. He later joined the Freedman’s Inquiry Commission.

Robert Dale Owen published many tracts that reflected his political views. He wrote many articles for publications such as Scribner’s Monthly and the Atlantic Monthly. In 1870, he released a novel called Beyond the Breakers. In 1874, he released his autobiography, called Threading My Way: Twenty-Seven Years of Autobiography.

In 1832, Robert Dale Owen married Mary Jane Robinson. They had two daughters, named Florence and Rosamond. They also had two sons, named Julian and Ernest. They had two more children who died during infancy. Mary Jane passed away in 1871. In 1876, Owen married Lottie Walton Kellogg.

In 1875, Owen had a mental breakdown and was briefly hospitalized at the Indiana Hospital for the Insane. He passed away on June 24, 1877, in his summer home on Lake George, New York. His body was initially buried in Warren County, New York. His remains were later transferred to New Harmony, Indiana.

The town of Dale in Indiana was named after Robert Dale Owen in 1843. In 1911, a bronze bust of him was built on the grounds of the Indiana Statehouse in Indianapolis