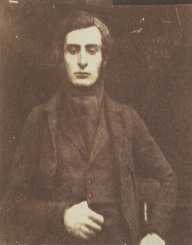 Robert Adamson was a Scottish chemist and pioneer of photography during its formative years.

Robert Adamson was born in St. Andrews in Fife, Scotland on April 26, 1821. He was part of the ten children born to Alexander Adamson and Rachael Melville. H grew up in the coastal environment of St Andrews captivated by the beautiful sceneries and natural topography. He went to Madras College located in St Andrews. In school, Adamson excelled in mathematics and mechanical science. He was employed at a local engineering shop and worked as an intern for a while. He was assigned high precision mechanical duties for an apprentice. Fascinated by the apprenticeship, he decided on being an engineer.

Despite his zeal and determination, Adamson suffered poor health that hampered his progress in pursuing a career in engineering. He took informal lessons on the calotype branch of photography from his university lecturer brother John. He later apprenticed at the workshop of John’s colleague at the University of St Andrews scientist David Brewster. Having learned the new art of chemistry, Adamson embarked on his photographic journey. On May 10, 1843, he created his first studio at Rock House in Edinburgh. Two months later, he met David Octavius Hill through David Brewster.

Octavius was a canvass painter of Scottish landscapes and natural scenes. The working partnership between the two blossomed despite their age gap. Hill met Adamson when he was 41 and Adamson 22. It almost became a father and son relationship. They pioneered the development of photography just four years after the discovery of calotype photography. The bond between the keen artistic eye of Hill and the ingenuity of Adamson proved a formidable treasure in the growth of photography.

With the only calotype studios in Edinburgh, Adamson became the city’s most sought after personality. He helped Hill by generating still photographs in the studio for Hill to complete his portrait without the being at the scenery or the person posing still for long. They produced portraits for all and sundry in Edinburgh and beyond. Adamson and Hill produced captivating landscapes, the rich and famous, the fishermen at the seashore and housewives at home. Soon, Adamson started getting foreigners from England and Ireland coming in for his studio and outdoor photography.

With time, Adamson ingenuity provided some adjustment on the cycle of calotype creation. He introduced some elements of light-sensitive chemicals on the traditional ones to create a better clear quality of images on the photosensitive paper. He made the steps of the cumbersome process easy and faster to the delight of his clients. It also helped Hill complete his portraits early enough.

The pair created a collection of their work and presented them in a gallery. They displayed their work in still photos and canvass portraits. The exhibition educated the masses on the process of making calotype using the Adamson created method. Since the early photography depended solely on sunlight, he used projected props to project light on the intended images. The finished product took a few seconds or some minutes to project at the exhibition depending on the projection of light.

After the exhibition, they embarked on the compiling of the Newhaven photographs. Adamson and his partner traveled through the port town taking photographs of the fishermen and the daily trades. They also went to their families and captured their wives and children. From the fishermen captions, the two went to the Scottish highlands. They captured the captivating sceneries of the countryside with professional precision. Adamson and Hill returned to their studio and compiled their production. They held the exhibitions in 1844, 1845 and the last one in 1846. Their major compilation apprehended at the Great Exhibition held in 1851 at the London’s Crystal Palace after the death of Adamson.

The young photographer Adamson battled with ill health from the middle of 1847. This slowed his work and later he stopped working to rest from the pains of his poor health. He returned to St. Andrews when his condition became unbearable in Edinburgh. Robert Adamson died on January 14, 1848, in St Andrews at the age of 26.

His untimely early death signaled an end to a promising career. In his four years of partnership with Hill, Adamson created a revolution within Scotland. He brought the art of photography to perfection just four years after his discovery. He improved the quality of the developed images with his chemistry knowledge despite his lack of proper training.

His calotype products are still on display in art exhibitions and museums in Britain and the US.