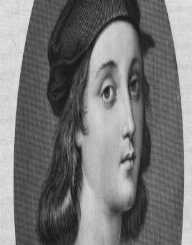 Raffaello Sanzio da Urbino was an Italian painter and architect who is best known for his painting, The School of Athens.

At the time of his birth, the Duchy of Urbino was part of the Papal States which meant the Pope was the head of state. The city of Urbino, like the rest of Italy, was keen to expand its prestige through investment and fostering the arts. Raphael’s father, Giovanni Santi, was a writer and painter and due to his talents was a member of the Duke of Urbino’s court. Urbino’s cultural focus was on writing. Raphael’s father served as the court's painter and decorated some altarpieces in the city.

Growing up surrounded by the aristocracy of the city young Raphael was exposed to a more excellent range of culture and education than the majority of fifteenth-century Italians. Raphael also struck up friendships with many of the other courtiers and frequent visitors, who would range from cardinals to poets and artists. Despite this lofty status as a youth, Raphael suffered tragedy as a youth. His mother, Magia, died while Raphael was just eight and by age eleven the boy had become an orphan as his father died in 1494.

Raphael became the subject of a legal battle between father’s brother, Bartholomeo and his stepmother. However, due to showing a talent for art while working with his father Raphael spent much of his time apprenticed to various artists in Urbino. Raphael took over the running of his father’s study as a teenager and began to create a name for himself as an artist. In addition to his father, it is believed that Raphael trained under and worked with the painters, Timoteo Viti and Pietro Perugino. The talent of Raphael meant it was difficult for art historians to distinguish his early contributions from those of his masters.

Raphael became a master painter in 1500 as he completed his training. The earliest work that can be attributed to a commission for Raphael is an altarpiece at the Baronci chapel in the Saint Augustine church in the Italian town of Citta di Castello. The painting featured Saint Nicholas standing over the devil while surrounded by god, three angels Mary and Saint Augustine. Raphael completed some other altarpieces around the local area at this time.

Raphael was also commissioned to paint images of the Madonna and cabinet paintings of Saint Michael and Saint George. Raphael had become well known in central Italy by this time and received calls to visit Perugia and Siena. Raphael also visited the cultural centre of Florence numerous times during his nomadic career. Raphael incorporated much of the developing Florentine fresco style into his work. Leonardo da Vinci was, in particular, a considerable influence on Raphael.

In particular, Raphael developed on Leonardo’s sfumato and dynamic pose styles. Although a great admirer of Leonardo, Raphael was disliked by Michelangelo, who also despised Leonardo. Some of Raphael’s most notable works from the second half of the first decade of the sixteenth century include Saint Catherine of Alexandria and Deposition of Christ. In 1508, Raphael had attracted the attention of the Pope and went to Rome.

Raphael was commissioned to paint the library at the Pope’s Vatican Palace. This was part of Pope Julius II significant redevelopment of the Vatican, Michelangelo was painting the Sistine Chapel at the time. This was the largest commission of Raphael’s career. The Vatican today contains some ‘Raphael Rooms,’ and his best-known work was his first as it includes The School of Athens. The painting consists of the great ancient Greek philosophers gathered on the steps of a building in Athens. It is unclear which philosophers are which, although it is accepted that Plato and Aristotle are the central figures and other prominent philosophers such as Socrates and Pythagoras are present.

It is also believed that Raphael included a self-portrait in work. The School of Athens only covered one wall of the room also featured were Raphael’s The Parnassus and Disputa. The paintings are meant to represent the various aspects of human knowledge. The work is influenced by Michelangelo’s work on the Sistine Chapel which became the dominant work of the time. It is this work in the Vatican Palace that secured Raphael’s place alongside da Vinci and Michelangelo as the masters of the High Renaissance.

Raphael also decorated other rooms in the palace, and the Deliverance of Saint Peter and The Fire in Borgo are some of the better-known pieces used to decorate these rooms. As well as his works within the palace Raphael also painted the portraits of Popes Julius II and Leo X. His fame had spread outside Italy, and two of his works were sent to France as gifts to Francis I. Other notable works by Raphael during his time in Rome include the Ecstasy of Saint Cecilia and the Sistine Madonna. These were some of Raphael’s last completed works.

In 1514, Raphael was named as architect for Saint Peter’s Basilica, although much of his designs would be removed when Michelangelo took over the project. Raphael also worked as an architect for some villas and palaces, but none of the buildings for which he created the designs and oversaw the construction have survived. Raphael also maintained his studio and kept a large number of students and apprentices. It is believed that up to fifty students worked under Raphael, this was an unusually high number. His last work was the unfinished altarpiece, The Transfiguration.

Raphael never married but was engaged to the niece of a cardinal for three years. He often toyed with the idea of becoming himself a cardinal and was a prominent member of the Vatican’s court. He kept some mistresses and portraits exist of them. While with one of his mistresses Raphael took ill with a fever. On his deathbed he confessed his sins and dictated his will, leaving much of his wealth to his mistresses. Raphael died on 6 April 1520. He is entombed at the Pantheon in Rome.