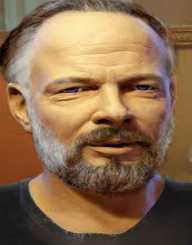 American science-fiction writer Philip K. Dick was born on the 16 December 1928 in Chicago, Illinois. He was born prematurely and had a fraternal twin, Jane Charlotte Dick. Jane survived for only six weeks. His father, of Irish descent, was Joseph Edgar Dick and his mother was Dorothy Kindred.

He was raised in San Francisco, and when he was a child, his parents divorced, and his father moved to Nevada. A custody battle ensued, and his mother won custody of her son. When he was seven, his mother moved with her son to Washington, D.C. In the late 1930s, he returned to California with his mother.

Philip K. Dick was a pupil at John Eaton Elementary School between 1936 and1938 and later graduated from Berkeley High School, California (1947). He enrolled at the University of California in Berkeley (1949-1950) but did not obtain a degree.

Philip K. Dick became interested in storytelling at a young age and in his preteen years began reading science fiction stories. Between 1948 and 1952, he worked at a record shop but had already started writing science fiction. In 1953, one of his stories The Defenders was published in the January edition of Galaxy Science Fiction. The same year his story The World She Wanted was published in Science Fiction Quarterly. Both stories were cover stories. His first novel Solar Lottery was released in 1954.

In 1962, Philip K. Dick won an award for his novel The Man In The High Castle and during the 1960s and 1970s established a substantial readership within the science fiction genre. Publications included Do Androids Dream of Electric Sheep, and Flow My Tears The Policeman Said. The Valis Trilogy was a watershed in his writing with Dick claiming that outside forces had influenced his writing. He called these contacts Valis.

His mystical experience occurred in early 1974, and he described it as an invasion of his mind by a transcendentally rational mind. The experience inspired him to record future experiences and thoughts in a journal which he called Exegesis. Dick went on to publish over 35 novels and six collections of short stories. His final novel, The Transmigration of Timothy Archer, was published posthumously in 1982.

Philip K. Dick was the 1963 recipient of the Hugo Award for The Man in the High Castle. Other awards include the 1975 John W. Campbell Memorial Award: Best Novel for Flow My Years, the Policeman Said. The 1978 British Science Fiction Association Award: Best Novel for A Scanner Darkly and the 1979 Graoully d’Or for A Scanner Darkly. In 2005, Dick was inducted into the Science Fiction Hall of Fame.

As the age of 7, Philip K. Dick developed an eating disorder. He was placed in a special school and diagnosed as a potential schizophrenic. In the mid-1960s, he began using methamphetamines as well as LSD and wrote about it in The Shifting Realities of Philip K. Dick. Methamphetamines remained an issue throughout his life.

His personal life was troubled at times. His third wife claimed he had tried to push her car off a cliff; he said that she was trying to kill him and had her involuntarily institutionalised. He lived with Grania Davis in the mid-1960s and attempted to suicide in a motor vehicle with her as a passenger.

At age 53, on the 2 March 1982, Philip K. Dick died from complications from a stroke. His ashes are buried next to his twin sister Jane in Riverside Cemetery, Fort Morgan, Colorado. A biography about his life Dick, Divine Invasions: A Life of Philip K. Dick by Lawrence Smith was published in 1989.