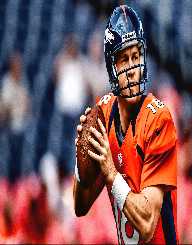 Peyton Williams Manning was born in New Orleans, Louisiana, on March 24, 1976. His father is the former NFL quarterback Archie Manning. His brother Eli is the New York Giants quarterback. From an early age, he showed talent and interest in football. He went to Isidore Newman High School, where he lead his football team to a record 34-5 and throwing for more than 7,000 yards. He was viewed as the nation’s No.1 football recruit.

In 1994, Peyton Manning enrolled in University of Tennessee. During his four-year career, he set a 42 conference, school, and NCAA records. He passed for 11,201 yards, registered 863 completions and connected for 89 touchdowns. He became Tennessee’s all-time leading passer and won 39 out of 45 games. He began his first season as the third-string quarterback. But after the team's starter Todd Helton got injured, Manning took over his position and remained in that place for the rest of his college career.

Manning completed his degree in Bachelor of Arts in speech communication in three years, but he returned to Tennessee for his senior year. In his high season, Manning won several awards - first-team All-American, the Maxwell Award, Best College Player ESPY award. In 2005, Tennessee retired Manning’s number (16).

After finishing his last season in Tennessee, Peyton Manning joined Indianapolis Colts as the first pick in 1998. Since then, Manning played for the Colts full 13 seasons. In 2011 he acquired a neck injury which cost him the entire season. Until then, he had a streak of 227 consecutive starts. During 19 months Manning had three necks surgeries to repair an entrapped nerve that was weakening his throwing arm.

Since their leader was not able to play, Colts had the worst record in the league and drafted a new quarterback. After he recovered from the injury, Manning joined the Denver Broncos and played with them until 2015. Altogether, Manning has played 17 NFL seasons.

After his injury, there were some concerns about his ability to play. But at the start of 2012 season, Peyton Manning proved these concerns wrong. He led the Broncos to the AFC West title and was named the AP comeback player of the year.

Although 2012 season was impressive, the 2013 season was record-breaking. He started the year with a record of seven touchdown passes in one game. By the end of the season, he had achieved 55 goals and 5,477 passing yards, which earned him the MVP award. Broncos went on to play in the Super Bowl but were beaten.

The next season was again a record-breaker for Manning. However, he injured his foot and was not able to play. He returned to the game in second half of season and sparked a victory for the Broncos, which won the team the top record in the conference. After winning the Super Bowl against Carolina Panthers, Manning announced his retirement from the NFL.

Peyton Manning holds the record for NFL’s Most Valuable Player - he has received the honor a total of 5 times. He has been referred to as one of the greatest passing quarterbacks of all time. He has also been named to the Pro Bowl a record of 14 times and called to the first team All-Pro seven times. Manning holds the record for career touchdown passes and career passing yards.

In his 2014 season, Manning achieved a personal record with his 509th career touchdown pass, surpassing the previous record holder Brett Favre. Next year, he also excelled him with a history of 71,838 passing yards.

Despite his great success in the regular season, his statistics in post-season are not so impressive. Still, Peyton Manning has won two Super Bowls and played in other two.

The Manning family has often been described as the “Football royalty” since his father was an NFL quarterback, and his brother Eli is a two-time Super Bowl winner.

Peyton Manning got married in 2001. He and his wife Ashley met before he started his freshman year in college. The couple has twins - a son and a daughter, who was born on March 31, 2011. He is a committed Christian and has said that his priorities are ranked in order- faith, family, friends, and football.

In 2000, Manning and his father co-authored a book “Manning: A Father, His Sons, and a Football Legacy.” His net worth is estimated to be $ 150 million. In 2012, Manning purchased 21 Papa John’s Pizza stores in Colorado.

After joining NFL, Manning started his charity “The Payback Foundation” with a mission to help disadvantaged kids. Alongside with his brother Eli, Manning assisted in the wake of Hurricane Katrina by delivering water, baby formula, diapers and pillows for the people of New Orleans.