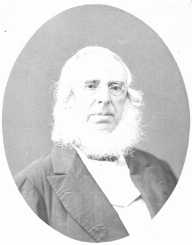 Peter Cooper was born on the 12 February 1791 in New York City. His parents were John Cooper, a hatmaker who had served as a lieutenant in George Washington's army; and Margaret Campbell. Peter Cooper was their fifth child. The family was of Huguenot descent with a mix of Dutch and English as well.

When Peter Cooper turned seventeen, he started working as an apprentice coachmaker. He did well at his apprenticeship and was offered a loan to start his own business. Copper declined the offer. Instead, he spent some time designing cloth-shearing machines. Once perfected, he went into business manufacturing and selling the machines. His business did well during the Second War of Independence in 1812. Once the war was over, and demand for his product started to slow, he diversified and started making furniture. He sold this furniture business; then bought and sold a few other businesses. He was a natural entrepreneur and kept looking for the next best thing where he could make a profit. In 1821, Peter Cooper bought a glue factory in Kips Bay. He became a successful industrialist, and by 1828 he was working with all the major tanners and related manufacturers in New York City. In the late 1820s, he handed over the glue factory to family members and purchases land in Maryland.

Once Peter Cooper started developing Maryland property in 1828, he discovered iron ore on the property. He went ahead and built up an iron works. The iron ore his enterprise produced needed transporting, and when the railway company had difficulty with the terrain, Cooper designed the small, powerful engine known as the Tom Thumb steam locomotive. He had this perfected by 1930. By 1836, he began operating an iron ore rolling mill in New York. He was the first iron ore producer to use anthracite to puddle iron and the mill quickly become very successful. Later he moved the enterprise to New Jersey, on the Delaware River. Around the same time, he started buying up real estate and investing in insurance companies. Soon he was a very wealthy man.

Peter Cooper was an active abolitionist and also concerned himself with the Indian Reform movement. He was active in the forming of the Board of Indian Commissioners (1869) and assisted Indian delegation in their bid to present their case in Washington DC and New York between 1870-1875

Peter Cooper’s name will always be synonymous with the Tom Thumb, the first steam locomotive in America. He was also instrumental in the developed a system for towing canal boats, irons beams that made it possible to construct the first fire-proof buildings. He also owned a substantial number of telegraph lines across North America and was a major investor in the laying of the first Atlantic cable between Europe and North America.

Peter Cooper married Sarah Bedell in 1813, and the couple had six children. In those days of high infant mortality rates, only two of these children survived. Edward, who later became a Mayor of NYC and Sarah Amelia, who married Abram Hewitt, an industrialist, and inventor.

Three of Cooper’s granddaughters were founders of the Cooper-Hewitt National Design Museum which today is part of the Smithsonian Institute.

Peter Cooper lived to be ninety-two and died in April 1883. Some places are named after him including the Peter Cooper Elementary School, the Peter Cooper Station Post Office, Cooper Park in Brooklyn and Cooper Square in Manhattan. When he died, he was one of the richest men in America; and also one of the most respected.

Peter Cooper founded one of the first non-profit charitable organizations in the United States. In 1851, he started The Children's Village.

Peter Cooper was both a philanthropist and an educationalist. He was chairman of the Public School Society, an organization which was responsible for funding free schools in New York City, using money provided for by the City of New York. Cooper had been impressed with the Polytechnical School in Paris, France. The idea was to provide free practical courses to enable people to find work and succeed in business.

Peter Cooper founded The Cooper Union for the Advancement of Sciences and Art as a private college. He aimed to provide free quality education for the working class To this end; he had a suitable building constructed in New York City at the cost of US$600,000. The Foundation building with the Great Hall in the basement is a New York icon. At the time, the Foundation building was one of the tallest in New York City. The Great Hall was the scene of many historic moments including some of the earliest speakers advocating workers rights, universal suffrage, and the American Red Cross. From President Lincoln to President Obama in 2010, many American politicians have given speeches in the Great Hall.

The college which offered open admission night classes was an immediate success, drawing a record number of applicants. Although the evening classes were unisex, most places were taken up by men. Cooper then opened a Women’s School of Design. The entire venture was a success story with people utilizing the facilities, learning and mixing with like-minded people. The Cooper Union continues its proud history as a major American institution of learning.