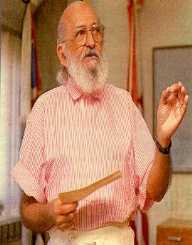 Brazilian educator Paulo Freire was born in Recife, Brazil on the 19 September 1921 into a middle-class family. He was a child in the Depression years during the 1930s, and after his father died in 1934, the family struggled financially. He later said that at the time, his social conditions did not allow him an education.

He caught up with his education which had been affected by the family’s dip in fortunes and in 1943, he enrolled at the University of Recife where he studied law and philosophy.

Although qualified in law, Paulo Freire started his working life teaching in secondary schools. Then in 1946, the state of Pernambuco made him the Director of the Department of Education and Culture in the Social Services Department. Working with illiterate students, Freire started to develop a teaching philosophy which came to be associated with liberation theology. In 1961 he was appointed Professor of History and Philosophy of Education at the University of Recife. The university offered courses for trainers across Brazil with the goal to teach over two million illiterates to read.

Freire was imprisoned after the 1964 coup d’etat in Brazil for what the new regime considered subversive behavior. After a brief period of imprisonment and a short stint in Bolivia, Freire moved to Chile where he continued his work.   He then held a position with UN School of Political Sciences giving seminars and holding lectures.  Harvard University appointed Freire Visiting Professor at the Centre for the Study of Development and Social Change for the period 1969 to 1970.

In 1970, he worked for the World Council of Churches in Geneva as a special consultant in the Office of Education. At the end of the 1970s, he returned to Brazil, settling in Sao Paulo and setting up an adult literacy project for the Workers Party. In 1988  Freire became the Sao Paulo municipality’s Secretary of Education.

His published Education as the Practice of Freedom in 1967 and the followup Pedagogy of the Oppressed came out in 1968.

As well as education, Freire life’s work influenced those involved in community development, health, and other social services in working towards positive social change through education.

In 1944 Paulo Freire married Elza Mai Costa de Oliveira who was also a teacher interested in promoting literacy. The couple had five children together.