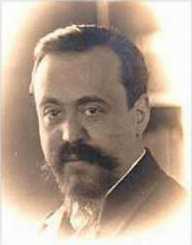 French composer Paul Dukas was born on the 1 October 1865 in Paris, France to Eugenie and Jules Dukas. His father was a Jewish and worked as a banker. Dukas’s mother, who was musical and played the piano, died when he was five years old. He was one of three children.

Paul Dukas had piano lessons growing up, and at age fourteen he became interested in composition. In late 1881 he started attending the Conservatoire de Paris, and his teachers included George Mathias, Theodore Dubois, and Ernest Guiraud. He was a contemporary of Claude Debussy, and they became lifelong friends. While at the Conservatoire he won second place at the Prix de Rome for Velleda in 1888 but was disappointed that he did not win.

After a brief military service, Paul Dukas began his career as a critic and composer. His first review was of Wagner’s Der Ring des Nibelungen, which was conducted by Gustav Mahler at Covent Garden, London in the year 1892. The review marked the beginning of his career as a music critic. Afterward ,he wrote regular reviews for various French journals.

One of his first compositions was Polyeucte, an overture for orchestra (1891). During the 1890s Paul Dukas wrote two of his best-known works: The Symphony in C (1896), his only symphony, and The Sorcerer’s Apprentice (1897). These works established his reputation as a classical composer.

The Symphony in C was first performed in January 1896 and was dedicated to Paul Vidal. It was described by one critic as modernism in classical form and consisted of three movements, not the traditional four. At the time there was some criticism from the public as well as musicians, but today it remains as one of the pieces for which he is best remembered. His next work The Sorcerer’s Apprentice (1897) was based on a poem of Goethe, Der Zauberlehrling. This short orchestral piece is his most famous work.

At the turn of the century, Paul Dukas composed the Piano Sonata (1901), and Variations, Interlude and Finale on a Theme by Rameau, for piano (1902) followed. His opera Ariane et Barbe-Bleue was produced for the first time at the Opera-Comique in 1907. It was set to a libretto by Maurice Maeterlinck. It won praise from Arturo Toscanini. Sir Thomas Beecham produced it at Covent Garden in 1937. Productions of Ariane et Barbe-Bleue in modern times including in Paris (1990), Hamburg (1997) and Paris (2007).

The ballet La Peri (1912) focuses on a Persian prince in search of the lotus flower of immortality. It was written for Natalia Truhanova, the Russian-French dancer who performed at the ballet’s debut.

The ballet La Pere was Dukas’ last large composition. Paul Dukas produced a tribute to Debussy in 1920, La plainte, au loin, du Faune, for piano. Armours (1924) for voice and piano was set to a Pierre de Ronsard sonnet on the occasion of the 500th anniversary of the poet’s birth. Dukas was working on an operatic version of The Tempest at the time of his death.

While his output seems small, Dukas destroyed many other works with which he was dissatisfied.

In later years Paul Dukas was elected a member of the Academie des Beaux.

The piece Dukas is most famous for today is The Sorcerer’s Apprentice (1897). Paul Dukas is also generally still known for the opera Ariane et Barbe-Bleue and the ballet La Péri.

Paul Dukas married Suzanne Pereyra in 1916, and the couple remained married until his death. They had one child, a daughter Adrienne-Theresa b.1919.