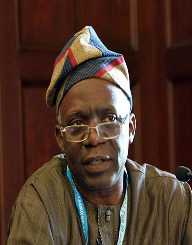 Olusegun Obasanjo was born on March 5, 1937. He is a Nigerian politician. He is the former President of Nigeria. He held the position of President from 1999 to 2007. He served as a military ruler during his reign. He is the first military ruler in Africa to have handed over power to a democratic government.

Olusegun Obasanjo was born on March 5, 1937, in Ogun State, Nigeria. He was however brought up in Abeokuta, South West Nigeria. He attended Baptist Boys’ High School, Abeokuta. He later worked as a teacher. In 1958, he joined the Nigerian Army where he travelled to England for a six months training. He went to train in the Service Commission at the Mons Officer Cadet School. He was later made an officer of the Nigerian Army. He also went to India where he trained at the Indian Army School of Engineering. He also trained at the Defence Services Staff College in Wellington.

In 1967, Olusegun Obasanjo was made the commander of 2 Area Commander. He got the rank of commander after he had been promoted as Chief Army Officer. He brought an end to the Biafran Civil War when he captured Owerri after being promoted to commander of 3 Marine Commando Division. In 1975, he supported the coup de tat that was led by General Murtala Ramat Mohammed. The coup was a success, and Ramat replaced the then head of state Yakubu Gowon and became the President of the new government with Obasanjo as his deputy.

In 1976, Army Colonel Dimka headed a coup attempt to kill Ramat, Olusegun Obasanjo and other senior officers of the government. Ramat was assassinated, and the leadership passed to Obasanjo. General Theophilus Danjuma also survived the coup. He changed the security arrangements in Lagos, Nigeria. He together with Theophilus altered the line of command then. In 1976, he was appointed the head of state by the Supreme Military Council, a position that he held up to 1979.

In 1979, he collaborated with the United States to ensure that a second Republican Constitution was drafted on the United States Constitution Model. In the same year, he handed over the Presidency to a newly elected democratic President of Nigeria, Shehu Shagari. In 1995, he was confined in prison by General Sani Abacha, but he was released in 1998 after Sani died. In 1999, he became the Presidential candidate for the People’s Democratic Party.

Olusegun Obasanjo won the elections that were held in that year, and he became the President of Nigeria in the same year. He took presidency on May 29, 1999. May 29, is marked as the Democracy Day in Nigeria. He started his Presidency by travelling a lot to create relations with Western Countries such as the United States and the United Kingdom. He made it his mission to eradicate poverty and corruption. He also sought the reformation of the police and military to allow for the smooth transition of Democracy.

In the 2003 elections, Olusegun Obasanjo was re-elected for another term as President. He won the elections after defeating General Muhammadu Buhari who is a former military ruler. In 2006, he and President of Cameroon, Paul Biya signed the Greentree Agreement in regards to the dispute of the Bakassi Peninsula border. His Presidency led to the economic growth of Nigeria. In 2007, his presidency ended, and he became the Chairman of the Board of Trustees of the People’s Democratic Party, a post that he held up to 2012. He is also a member of the Africa Progress Panel. He is also a member of the Club de Madrid that entails members who are Prime Ministers and Presidents of different countries.

In 1976, Olusegun Obasanjo got married to his first wife, Esther Oluremi. He married a second wife Lynda who was killed in 1987 by armed men. In 1991, he married his third wife Mojisola Adenkule who he remained married to until 1998. In 1999, Olusegun Obasanjo married Stella Abebe who became First Lady of Nigeria from 1999 until her death in 2005. His children live in Nigeria, United Kingdom and the United States of America.