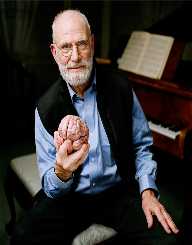 Oliver Wolf Sacks was a British neurologist, science historian, and author. Born on July 9, 1933, he is famous for his writings on case histories of patients and personal experiences of rare neurological disorders. Sacks developed a great understanding and became sympathetic to patients with unusual disorder while treating them. His works include Awakening, 1973, Musicophilia: Tales of Music and the Brain, and several other articles. Sacks’s works have been adapted for plays, opera, dance, and feature films, among others. Sacks received a CBE for services to medicine during the 2008 Birthday Honours.

Oliver Wolf Sacks was born on July 9, 1933, in Cricklewood, London to Jewish parents Muriel Elsie Landau, and Samuel Sacks as the youngest of four children. His mother was one of the first female surgeons in England and his father a physician. Sacks came from a family of physicians, scientists, writers, and other eminent professions.

At the age of six, Sacks and his elder brother Michael were moved from London to a boarding school in the Midlands to escape the Blitz. They will remain there until 1943. While there the siblings suffered harsh treatment from their vicious headmasters. Details of his experience is contained in the autobiography, Uncle Tungsten: Memories of a Chemical Boyhood. After returning from the boarding school, aged 10, Sacks attended St Paul’s School, London. During this period, he resolved to follow his parents’ career in medicine.

Following his graduation, he enrolled at The Queen’s College, Oxford in 1951. In 1954, he earned a bachelor’s degree and then a bachelor of medicine, bachelor of surgery in 1958.

Following his graduation, he did an internship at Middlesex Hospital in London, completing in 1959. The following year, he joined the Queen Elizabeth Hospital in Birmingham as a house surgeon. That same year, he left England arriving in Montreal, Canada on July 9, 1960. On his visit to the Royal Canadian Air Force, he expressed an interest in becoming a pilot. However, they dissuaded him and asked him to concentrate on his medical career.

He then moved to the United States where he did an internship in Neurology at Mt. Zion Hospital in San Francisco. Following that, he did a fellowship in Neurology, at the University of California, Los Angeles from 1962 to 1965.

After the residency, he worked as an instructor at Albert Einstein College of Medicine. Subsequently, he became a clinical professor at the college from 1966 to 1975. Within that same period, he served as a neurologist at Beth Abraham Hospital in the Bronx. He worked there from 1966 to 2007. While there, he met some sleeping sickness patients who had contracted the disease during an epidemic between 1917 and 1927.

Despite surviving the outbreak, they developed a type of Parkinsonism that resulted in speech impairment, mobility challenge. He describes the treatment process in his book Awakening, 1973. From 1992 to 2007, he was a professor of neurology at the New York University School of Medicine. In addition, he served as a consulting neurologist at the university’s Comprehensive Epilepsy Center from 1999 to 2007. He returned to the university from 2012 to 2015. From 2002 to 2007, he served at the Columbia University Medical Center as a professor of neurology and psychiatry.

Sacks wrote several books on neurological disorder. He published “A Leg to Stand On” in 1984, which addresses the effects on patients after a doctor’s dismissal of their condition. The book also contained his personal experience having injured his leg in a climbing accident.

Following that, Sacks gave a detail analysis of his patients’ conditions in the book, The Man Who Mistook His Wife for a Hat (1986). The more Sacks encountered patients with various disorders, the more he expanded his knowledge on the field. These engagements resulted in works like Seeing Voices, 1989, and An Anthropologist on Mars, in 1995. Subsequently, he published works like The Island of the Colorblind, 1997, and Musicophilia: Tales of Music and the Brain (2007). Later works include The Mind’s Eye (2010), Hallucinations (2012). Sacks also wrote some autobiographies including Uncle Tungsten: Memories of a Chemical Boyhood (2001), Oaxaca Journal (2002), and On the Move (2015).

Oliver Sacks remained unmarried. He was an avid swimmer, picking the act since childhood. Despite his long stay in the United States Sacks never relinquished his Britain citizenship. In 2006, he settled for radiation therapy for uveal melanoma in the right eye. The treatment ultimately caused blindness in the right eye. He died of ocular melanoma on August 30, 2015, in his Manhattan home. He was 82 years.

Sacks earned an American Academy of Arts and Letters membership in 1996 and became a Fellow of the New York Academy of Sciences in 1999. He earned numerous honorary doctorates from several universities including New York Medical College and Queen's University. Sacks received the Commander of the Order of the British Empire (CBE) for his services to medicine in 2008.