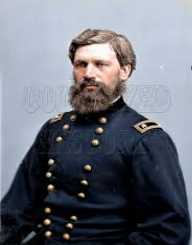 Oliver Otis Howard was born on 8th November 1830. He was born in Leeds, Maine, in the United States. Howard's parents, Rowland and Eliza Howard, were farmers, and his father died when he was nine years of age.

Oliver Otis Howard's early posts included the Watervliet Arsenal near New York and the Kennebec Arsenal in Maine. He transferred to Florida in 1857 where he took part in the Seminole Wars. During his stay in Florida, Howard became a Christian, and he then became known as "the Christian General."

In 1857, Howard received a promotion to the rank of First Lieutenant. He went back to West Point Academy a short time later, and he learned to teach mathematics. Howard thought about joining the ministry, but he decided on a military career once the Civil War began.

In May 1863, Howard had a tremendous military loss at the hands of Robert E. Lee and Lieutenant General "Stonewall" Jackson. Howard fought in the Battle of Gettysburg, but he once again lost to the Confederate troops.

Howard and his troops then went to the Western Theater. Joining with other soldiers, they won a significant battle, and Howard became Commander of the army in Tennessee.

In 1865, Oliver Otis Howard became Commissioner of the Freedmen's Bureau. He had a significant role in reconstruction after the war, and he stayed in the position until 1874.

In 1874, Howard took command of the Department of the Columbia. He participated in the Indian Wars, and he was responsible for the surrender of Chief Joseph.

Howard joined West Point Academy in 1881 as the superintendent. The year after, he became Commander of the Department of the Platte. He stayed in the role for four years. After two further postings, Howard retired from the military in 1894. He held the rank of Major General.

Oliver Otis Howard was responsible for founding Howard University in 1867. He was President from 1867 until 1874. The school was open to males and females, and it had no regard to race. Blacks were still looked down on in the South, but Howard welcomed them.

His second university was founded in 1895 in Tennessee. Howard also wrote after the war, authoring several books. His books included Nez Perce Joseph (1881) and Autobiography (1907).

Oliver Otis Howard's awards include the Legion of Honor (France) in 1884 and the Medal of Honor in 1893. He also earned the Civil War Campaign Medal and the Indian Campaign Medal.

In 1855, Oliver Otis Howard married Elizabeth Waite. They had seven children together. Howard died of old age on October 26, 1909. Howard has had several schools and buildings named after him, including an Army Reserve Center in Maine.