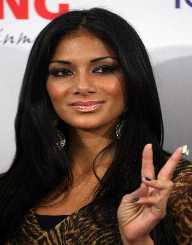 Nicole Prascovia Elikolani Valiente was born on June 29, 1978, in Honolulu, Hawaii. Her father Alfonso is of Filipino descent, whereas her mother is a native Hawaiian with Ukrainian ancestry. When she was a baby, her parents separated. When she was six years old, her mother, sister Keala and stepfather Gary Scherzinger moved to Louisville, Kentucky.

Scherzinger attended Bowen Elementary school and Meyzeek Middle School. She began attending the Youth Performing Arts School at DuPont Manual High School and performed with Actors Theatre of Louisville. In 1996, she was the runner-up of the Kentucky State Fair’s Coca-Cola Talent Classic Contest. Scherzinger earned a scholarship and attended Wright State University, where she majored in theater arts and minored in dance. During this time, Scherzinger was cast in several regional musicals, like Chicago, Guys and Dolls and Show Boat.

In 1999, Scherzinger was hired by Travis Meeks, the leader of the band Days of the New, as a backup vocal in the group's second studio album. She dropped out of college, and toured through the country with the group to support the album. In 2001, she quit the band and auditioned for the WB’s television show Popstars. The show’s idea was to chronicle a formation of a group until the recording of their debut album. Warner Bros. imprint London-Sire Records signed popstars. At first, Scherzinger was reluctant to sign with a group, but it was a way for her to get to Los Angeles. She sang Whitney Houston’s “I Will Always Love You” and won the spot. The group, Eden’s Crush, was established, and their debut single “Get Over Yourself” was released in 2001. The debut studio album Popstars reached No. 6 on the Billboard 200 chart. The band toured with Jessica Simpson and ‘N Sync, but by the end of the year, the group disbanded.

In 2003, Scherzinger produced a demo CD in hopes of scoring a solo recording contract and traveled to New York. She tried to sign with Arista Records. During this time, Scherzinger was cast in the comedy Love Don’t Cost a Thing. Robin Antin launched an open audition for the burlesque troupe Pussycat Dolls, and Scherzinger was recommended for the audition. Her audition was successful, and Scherzinger joined the group. She became the lead singer of the group and was also credited for songwriting in their first album PCD, released in 2005. The single “Don’t Cha” became a major international hit, and was followed by “Buttons” which got nominated for a Grammy Award.

After finishing work with the album PCD, Scherzinger began working on her solo album and was signed by Universal Music Publishing Group. She released several singles, that failed to gain any significant attention, and eventually, her first album was pushed back for her to focus on the second album of Pussycat Dolls. The album Doll Domination was released in 2008 and peaked at number four on the Billboard 200 list. The following year, the group embarked on Doll Domination Tour. During the tour, Scherzinger re-wrote a pop version of “Jai Ho” for the movie Slumdog Millionaire. The song became a major hit and reached number one in charts in 17 countries. After the end of the tour, Pussycat Dolls announced a hiatus to pursue their solo careers.

In 2010, Scherzinger participated in the season 10 of Dancing with the Stars, and together with her partner Derek Hough won the competition. In August that year, she starred in the Hollywood Bowl production of musical Rent, for which the critics praised her. Her debut album Killer Love was released in Spring of 2011. The album had moderate success, but her single “Don’t Hold Your Breath” became her first number-one single as a solo artist. The same year, Scherzinger joined judges on The X Factor US, replacing Cheryl Cole.

In 2014, Scherzinger signed a $4.5 million recording deal with Sony Music Entertainment and left The X Factor. Her studio album Big Fat Lie was released in October. Scherzinger also made her West End debut starring in the 2014 revival of the musical Cats at the London Palladium. For her performance, Scherzinger was nominated for Laurence Olivier Award. In 2015, she won the celebrity variety show I Can Do That. She also became the co-host of the series Best Time Ever With Neil Patric Harris.

Around 2001, Scherzinger met with Nick Hexum backstage at a Days of the New concert. The couple dated and got engaged, but broke up in 2004. After this, she was in a long-term relationship with Formula 1 World Champion Lewis Hamilton, until 2015, when the couple could not overcome their differences. She then began dating Albanian footballer Pajtim Kasami, and in 2016, Bulgarian tennis player Grigor Dimitrov.

In 2012, Scherzinger announced that she has been struggling with bulimia for the past eight years. Scherzinger has contributed to various charities, performing for causes like global warming, cancer research, and aid for people that have suffered in natural disasters. In 2013, she became the global ambassador of the Special Olympics.