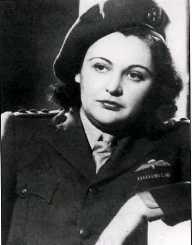 Nancy Wake was born on August 30, 1919, in Wellington, New Zealand. Her parents were Ella and Charles Wake. She also had five older siblings.

As a young adult, Nancy Wake attended the North Sydney Household Arts School. After she completed her education here, she became a nurse for a few years and then later worked for a shipping company. She later moved to London, England, where she went to school to Study Journalism. After she completed her education, she began her career in journalism.

After finishing her education, Nancy Wake began working as a freelance writer for Hearst Newspapers. This company owned much newspaper around the United States. Her most famous work is from the 1930’s, as she wrote about the Nazi rise to power. She even wrote about an interview with Hitler in 1933.

Nancy Wake was living in England when World War II began. She quickly moved to France with her husband at the time, Henry Fiocca. She didn’t hide from the Nazis, though. Instead, she put her nursing skills to work and began traveling around France with an ambulance and giving supplies to refugees.

Sadly, in 1940, the Nazis made their way into France. Wake wanted to become more involved in the war effort, so she joined the French Resistance, working as a messenger. However, the Nazis were aware that she was doing this, so they tried to spy on here. Luckily, she was able to evade their capture.

By 1943, Nancy Wake was on the Nazi’s most-wanted list. In the same year, her husband was captured, tortured for information, and killed. However, Wake did not know about his death until after World War II had already ended. She herself was later arrested, but she was released quickly.

In late 1943 through 1944, she became a member of the First Aid Nursing Yeomanry. Around this same time, she worked in France, helping army members who were stationed here. Nancy Wake was also in charge of the finances here. It was up to her to pay for weapons and other equipment needed in the war effort. She also enrolled thousands of people into her group. The group fought battles as well, winning quite a few of them.

After World War II, Nancy Wake worked with the English Intelligence Department until 1948. After which, she moved to Australia. She tried to get into politics here, but lost two elections, in 1949 and 1951. After losing an election again in 1951, she moved to England where she worked as an intelligence officer again. She worked here until her second marriage in 1957.

After her marriage, Nancy Wake moved back to Australia with her husband. She tried to get into politics again but failed to win an election. Beginning in the 1980’s, she and her husband retired. Wake kept busy though, writing an autobiography titled The White Mouse, in 1985.

All of Nancy Wake’s awards are for her work during World War II. Some of her most prestigious awards are listed below.

Nancy Wake was first married to Henry Fiocca. Sadly, their marriage ended with Fiocca was executed by the Nazis. She married for a second time in 1957 to John Forward. The couple stayed married until his death in 1997. After his death, Wake did not remarry.