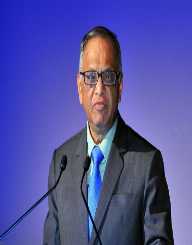 Also Known For : Founder Of Infosys

Hailing as one of the most successful men in India, there are no words that can define his worth. His name, Narayana Murthy is booming internationally for his immense work as an industrialist. In short, N.R serves as the CEO of the Indian multinational corporation Infosys Ltd. It is an Information Technology as well as consulting company. Narayana has played a vital role from the beginning till date. At his teenage years, Murthy started to display a never give up a soul. In addition to his creativity, he enrolled at one of the most prestigious technology institutions in India. However, he had to work for someone before launching his own business. That’s how his fame came at a stand. Let’s see what he has in store for us.

It was on August, 20th 1946 that a duo: N. Rama Rao and Padavathamma Murthy were blessed with a son in Mysore, India. He was none other than Nagavara Ramarao Narayana Murthy who in turn turned out to be a promising man in society. Murthy lived a decent life, but he was lucky to receive education from various institutions. His close uncle served as a civil servant, and his protective father wanted him to follow his uncle’s footsteps. It was unfortunate that Narayan had other plans; he aimed to become a fervent engineer in future. During the 20th century, engineering acted as the only rags-to-riches opportunity in India.

After the completion of his studies, Narayana Murthy won a scholarship at India Institute of Technology. In all, the scholarship covered his fees alone and not miscellaneous expenses. It was at this time that his father opted to take him to a local college called the National Institute of Engineering. He majored in Electrical Engineering where he graduated in 1967.He then joined the Indian Institute of Technology where he received his master’s in 1969.It was during his studies at IIT that he came across IT gurus. There and then, he concentrated on one thing, Information, and Technology.

By the end of his course, Narayana received thousands of offers including from Air India and Telco, all thanks to his high-end skills. In spite of that, he opted to work at one of the India Institute called India Institute of Management in Ahmedabad.

It was at IIM in Ahmedabad that Narayana Murthy served as the chief system programmer. His work was to install several applications on computer systems. He became the first Indian to install time-sharing systems after Stanford and Harvard. He had a busy and tight schedule, but the reward was tremendous. He used to offer his service for more than twenty hours a day. But this is what made him prosper like no one’s business.

Early in the 1970s, Narayana traveled to work in Paris. But he wasn’t yet satisfied since he wanted to set up his own IT Company in India. It was in the middle of all thoughts that he opted to launch a company called Softronics. Surprisingly, before the company learned the ropes of the business, it collapsed on the way. So he decided to team up with Patni Computer Systems that was located in Pune.

Simultaneously, Narayana tried to taste the waters of entrepreneurship where he formed a group of six software gurus. They established several discussions and meetings where they opted to launch their own IT Company called Infosys Consultant Pvt Ltd now called Infosys Ltd in 1981. N.R became the president of Infosys where he has served as the CEO. In 2002 Nandan Nilekani overpowered his seat, and he acted as the chairman. It was in the same year that he got a place as the Chairman of the Board as well as the Chief Mentor in 2006.In 2011 he announced his retirement where he took a Chairman Emeritus title.

Further, Narayana has worked as the Director of DBS Bank, ICICI, and Unilever. Infosys Company started to show some signs of poor performance where Murthy took his previous position as Executive Chairman in 2013.But he later retired after a year where he continued to serve as the company’s Additional Director.

It was during his administration that Infosys turned into a multinational corporation. In fact, it became the most profitable company in India earning $1 billion yearly revenue. From 2000 to 2013 Narayana Murthy received several recognitions and awards. Some of the notable ones include India’s fourth highest civilian award, Padma Vibhushan award among others. Murthy is married to Sudha Kulkarni. The couple was blessed with two children called Akshata Murthy and Rohan Murthy. His dearest wife is known as a social activist and an author. Narayana Murthy is truly a Father of Indian IT Sector.