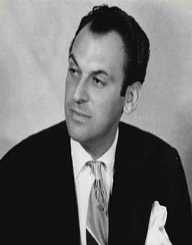 Moss Hart was an American playwright and theatre director. Born on October 24, 1904, he is regarded as one of the most successful playwrights of the 20th century. Hart had his first Broadway hit with Once in a Lifetime, 1930, which he wrote alongside George S. Kaufman.

Moss Hart was born on October 24, 1904, in New York City to Lilian Solomon and Barnett Hart. His father was a cigar maker. Born into a relatively low-income family, he had a younger brother called Bernard. The family lived in the Bronx and later in Sea Gate, Brooklyn. Hart had interest in theatre through his mother’s sister Aunt Kate, who usually took him there to see performances.

Moss Hart left school to work as an office boy for the theatrical producer Augustus Pitou at the age of 17. With this experience, he wrote his first play the following year but was not successful.

With a strong desire to succeed, he started work as a director of amateur theatre groups and spent his summer as an entertainment director of vacation resorts in the Catskills, which was known in the theatrical circles as “the borscht biscuit.” In 1930, he had his first Broadway success with Once in a Lifetime, which was a satire about the inception of the sound era in Hollywood.

Moss Hart wrote the play with George S. Kaufman, who displayed his excellent humourist's trait on the work. He would continue to collaborate with Kaufman until 1941. Their works includeYou Can’t Take It with You (1936), and The Man Who Came to Dinner (1939). The former won the Pulitzer Prize for drama in 1937. The film adaptation of You Can’t Take It with You by director Frank Capra and writer Robert Riskin in 1938 won Best Picture Oscar, and Capra won the award for Best Director.

Aside from working with Kaufman and later falling apart, Moss Hart did some individual musical and revues works. These include Face the Music, 1932, As Thousands Cheer, 1933, Jubilee, 1935 and I’d Rather Be Right. His works after Kaufman also include Christopher Blake, 1946, Light Up the Sky, 1948, and the musical Lady in the Dark, with a song by Ira Gershwin and Kurt Weill.

Moss Hart also did some directorial works on Broadway. He directed works like Junior Miss, 1941, Dear Ruth, 1944, Anniversary Waltz, 1955 and his biggest hit My Fair Lady in 1956. The latter won him the Best Director at the Tony Awards.he last directorial work was on Camelot in 1960.

He wrote the screenplay for Gentleman’s Agreement, 1947, which won him an Oscar nomination. Others include Hans Christian Andersen, 1952, and A Star is Born, 1954.His memoir Act: An Autobiography by Miss Hart was published in 1959. This was adapted into a film in 1963, starring George Hamilton as Hart.

Moss Hart and Kitty Carlisle married on August 10, 1946. The couple had two children and lived together until Hart’s death. Hart died of a heart attack on December 20, 1961, at age 57 in Palm Spring, California. He was buried in a crypt at Ferncliff Cemetery in Hartsdale, New York.