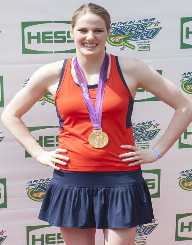 Melissa Jeanette Franklin is also known as Missy Franklin. She was born in Pasadena, California on the 10th day of May in the year 1995. She grew up in Centennial, Colorado. Missy's mother worked in the health field as a Physician while her father, Dick- worked in the field of consultancy. Missy‘s parents have no other child, and her mother was one who had a phobia for water. She, however, made up for this by making sure that Missy took to swimming as early as possible.

Missy Franklin was nicknamed by her father as “Missy the Missile” before the Olympics trials in the te year 2008. She did not get drawn to the moniker, but as time progressed, Missy did not mind having it emblazoned on her Nike sneakers. Missy has other interests apart from swimming, where she had made a name. She is studying Psychology and also broadcast journalism. She is so well built with a 6 feet and an inch frame. Missy's big feet, hands, and height all conspire to make her excellence in the water sports possible.

Missy Franklin competed in the American team trials for the 2008 Olympics while just 13 years old. She made it to the international scene at the age of 14 in the year 2009 by competing at the “Duel in the Pool.” This compensated for her missing out as a member of Team USA in the Olympics. Missy Franklin set sights were also placed on academia, and this made her turn down the offer to go pro.Missy opted for Berkeley’s instead to study at the University of California. Berkeley is reputed for having an excellent sports program that combines academics with athletes so that they have the best of both worlds. The university has an extensive array of recreational and sports facilities that rates among the best in the globe.

Missy Franklin has a reputation that places her as one of the world’s best swimmers in the league of Michael Phelps. Missy was awarded the “Breakout Performer of the Year” in the year 2009, at the USA Swimming gala.
When Missy competed at the long course world championship meet during 2011, she returned with three gold medals and two others. This was despite making this meet for the first time in her career.

Four years down the line after the 2008 trials failure, Missy Franklin made it to the 2012 Team USA pick for the Olympics.Missy was entered for a record seven events and set a national record for such feat.
Missy Franklin returned home with three notable gold medals and a bronze medal as well. She competed in the aquatic sprints and relay events.

Missy Franklin's victory in the Olympics 100-meter backstroke gave her gold, and she reprised this in 200 meters, an event for semi-finals in the space of 14 minutes.Missy did not lose her edge despite the close pairing of the events, and she came out tops once more. Missy Franklin was able to engraft a new world in the 200 meters backstroke event as she burst to the finish line with such gusto. In the team event, Missy worked with her colleagues to set a record in the 200 meters freestyle relay event. Missy’s fourth gold came in the medley for 4x100 relay, and this was in August 2012.

A Nose For College

Despite Missy Franklin's string of successes in many events across the globe, she turned down the chance to rake in endorsement money and go pro. She wanted the college focus, and she kept at it. Her determination paid off with a Berkeley scholarship, and she began to feature for the swimming team of her school. She raked in four titles in the NCAA meet in the solo races.Missy was also instrumental in Berkeley’s triumph at the Women’s Division 1 events at the Swimming and Diving team Championship of the NCAA. She raked up the accolades as Collegiate Woman of the Year 2015 as well as the Honda Cup.Missy kept her cool and won the treasured medals and awards.

A New Look At The Pro Circuit

After the NCAA championship ended in 2015, Missy Franklin decided to give the pro circuit a shot while focussed on the Olympics that was forthcoming in 2016. Her timing at the US trials, this time was not good enough, and she could only grab the second spot in the 200 meters freestyle and backstroke event. She also made it as a part of the 200 meters freestyle relay event.

Like in every area of life endeavor, Missy Franklin started to hit diminishing returns and was not in pole position during the 200 meters freestyle in the semi-finals during the 2016 Olympics. She only managed a gold medal from the Rio meet after the success of the American relay team. Missy picked up the gauntlet and started to root for her teammates instead of in the face of the reality that she was getting lost her edge in the aquatic field she has dominated over the decade. She set her eyes on getting back her love for the game after the Olympic slump.

Another Olympics In Sight

Missy Franklin averred that she is going back to training because she loves the water sports. And she was set for online classes in the Postgrad at Berkeley so that she can surround herself with the things she loves. Missy is again in the ambiance that gave her victory years back within the Berkeley campus, and her sights are set on the Tokyo 2010 Olympics. Missy Franklin has pinned her hopes on Dave Durden, who led the men’s swimming team as Number two gaffer. Missy sees Dave as a man who understands her challenges, highs, and aspirations. Having such a belter is what she considers helpful, and she is set to make the most of it.

Franklin looks undaunted, and the future might have more verses and chapters to record for her as an enduring legacy.

Missy Franklin released her book, “Relentless Spirit: The Unconventional Raising of a Champion, which detailed her exploits including the five-medal haul at the 2012 Olympics.