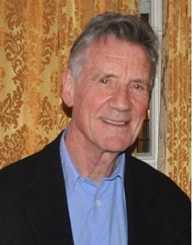 Michael Palin is an English comedian, actor and television presenter. He is best known for being a part of the Monty Python group.

Palin was born in  Ranmoor, Sheffield, England on 5 May 1943. Palin was born to Mary Lockhart and Edward Palin. Edward Palin was an engineer for a local steel firm. Palin attended Birkdale Preparatory School in Sheffield and Shrewsbury School. Upon graduation, Palin attended Oxford University where he studied modern history. It was at school that Palin made his acting debut, appearing in school productions from the age of five. At Oxford, he began writing and met Terry Jones. The pair collaborated and Palin also won acting awards during his time in university.

After graduating from Oxford Palin received his first professional job in television presenting Now!.Now! Was a pop show that aired in Wales. Palin also began working with Terry Jones on comedy scripts for numerous television shows. Palin worked with Jones on the well-known Ken Dodd Show and The Frost Report. It was on the Frost Report that Palin first worked with other future Monty Python members, Graham Chapman, John Cleese and Eric Idle.

Palin appeared in Twice a Fortnight alongside Jones and Bill Oddie. He also appeared in the children’s show Do Not Adjust Your Set with Eric Idle and David Jason. Do Not Adjust Your Set also featured the work of Terry Gilliam who would also become part of Monty Python. By the late 1960s, Palin was involved with work with Eric Idle, Terry Jones, and Terry Gilliam. It was at this point he was approached by John Cleese to work with him on a show the BBC had offered he and George Chapman. Palin agreed and brought Idle, Jones, and Gilliam with him.

The groups created a late-night comedy sketch show for the BBC titled, Monty Python’s Flying Circus. The show was characterized by the free-flowing style that often saw it abandon things like structure and punchlines. The writing adopted a stream of conscious style. Gilliam’s animation would bridge the variety of sketches. The show spawned some renowned sketches such as ‘Dead Parrot Sketch’ and the ‘Ministry of Silly Walks,’ as well as creating the catchphrase ‘Nobody expects the Spanish Inquisition.’ The show ran for three and a half seasons, the fourth season only running for six episodes instead of the usual thirteen.

The group felt they had exhausted their material and declined the BBC’s offer to continue the show. 1971 saw the first Monty Python film released, And Now for Something Completely Different. The title comes from a famous trope in the Flying Circus series whereby John Cleese would end a scene by announcing ‘and now for something completely different.’ The film was made up of material from the Flying Circus series, and it was aimed at breaking the American market.

The film proved popular in Britain but failed in America. The first proper Python film with a narrative was Monty Python and the Holy Grail. The film saw the return of Cleese who had left following season three of the Flying Circus and was largely financed by the bands Jethro Tull, Led Zeppelin and Pink Floyd. The film draws from Arthurian legend and is recognized as one of the greatest comedy films of all time. The Holy Grail earned over ten times its budget at the box office. The height of the Monty Python group’s fame came with the 1979 film Monty Python and the Life of Brian. The film sparked controversy and was banned in Ireland due to its setting in New Testament Palestine.

However, the film does not disparage Jesus or any of the major faiths in any way. Instead, the film lampoons the followers of religion and their blind search for a messiah. George Harrison of the Beatles provided the majority of the funding for the Film. Like the Holy Grail, the Life of Biran is considered a comedy classic, and it earned twenty million dollars at the box office. The film also gave the world the song Always Look on the Brightside of Life, which was written by Idle. The final work featuring all of the cast members of Monty Python was Monty Python’s the Meaning of Life. The film returned to the sketch show style of their earliest work. The film was less successful than its two predecessors. The group largely broke up after this only performing occasional live shows together.

Work Outside Of Monty Python

Michael Palin continued to work with other members of the Monty Python group and starred in Terry Gilliam’s film Jabberwocky and wrote Time Bandits with Terry Jones. Palin again worked with Gilliam appearing in his 1984 film, Brazil. Palin starred alongside Cleese, Kevin Klein and Jamie Lee Curtis in the comedy films, A Fish Called Wanda and Fierce Creatures. Palin also made some TV documentaries with the BBC. In 1980, he appeared in Great Railway Journeys of the World. His most famous work with the BBC is his travel documentaries, Around the World in 80 Days, Pole to Pole and New Europe. Palin has also released books covering the journeys he has undertaken on his shows. Palin has also presented shows on history and in particular the First World War.

Michael Palin married Helen Gibbins in 1966. The pair had first met in 1959 and had three children together, Thomas, William, and Rachel. William appears in the film Monty Python and the Holy Grail as Sir Notappearinginthisfilm.

Michael Palin won a BAFTA for Best Supporting Actor in 1988 for his role in A Fish Called Wanda. Palin has also received three Special BAFTA awards for his solo work and his work as part of Monty Python. Palin has been honored with medals by both the Scottish and Canadian Geographical Societies. Palin has had an asteroid named after him. Two British trains have also been named in his honor.