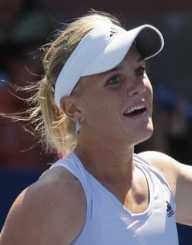 Melanie Jennings Oudin is an American female tennis player who rose to fame amongst the fans especially during her run in the quarterfinals of the U.S. Open that helped in the year 2009. She is a gifted tennis player who has achieved a lot over the last few years especially.

She has even won major tournaments like U.S. Open in the mixed doubles category. She was even the member of the American Fed Cup team from the year 2009 to 2011. She was also ranked amongst some of the best female tennis players in the world in the year 2010.

Following her passion, she took a big decision to home school, so that she can focus more on her game which was improving with every single day. This also provided her an opportunity to play more tournaments as well. She aimed big when it came to professional tennis as she decided to play professionally by the age of 9 only.

Keeping that in mind Melanie Oudin started playing tennis, and she had an excellent record of 92 wins in comparison to 29 losses in the singles competition in the International Tennis Federation (ITF). Pursuing her dream, as she stated that she is going to play professional tennis by the age of 16, she not only achieved that but she also won her first professional title at the $50,000 Lexington Event in July 2007.

Her performances increased with every passing match and not she had also started to win titles which pushed her into mainstream tennis players. Because of the same, she was also ranked amongst the top female junior players by the time she went professional in the year 2008.

She came into limelight and captured the attention of the tennis world when she entered in U.S. Open in the year 2009 and surprised everybody. She not only defeated four opponents including big names like Elena Dementieva who was a Russian star and Maria Sharapova but she also reached the quarter-finals of the U.S. Open where she was defeated by Caroline Wozniacki.

Melanie Oudin was just 17 years old at that point of time and she not only thrilled the crowds with her determination and positive attitude but also gave a tough competition the quarter finals.

For her excellent effort, she was also praised by Roger Federer about her brilliant effort. This also helped Melanie Oudin in boosting her confidence to perform at the grandest stage and also making her feel confident about her techniques and other aspects.

Though, she had a world of time in the 2009 U.S. Open she could not sustain this success that she received and could not cash in the confidence that she gathered in the subsequent major tournaments in singles competitions.

Although, Melanie Oudin had some success in the mixed titles along with Jack Sock where she won the 2011 U.S. Open Mixed Doubles Titles and later she even defeated Jelena Jankovic in the final of the Aegon Classic held in Birmingham, England which came as her first WTA title.

But after that, it was a tough road for Melanie Oudin. Therefore, Oudin retired from tennis on August 18, 2017, citing numerous health issues and injuries.