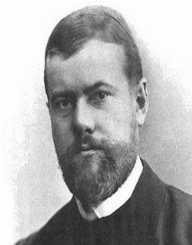 German philosopher, sociologist, economist, and activist Maximilian Karl Emil Weber was born on April 21, 1864, in Erfurt, Prussia. His father came from a family of industrialists, but trained as a lawyer and later became a politician. His mother Helene came Huguenot heritage. Weber had a younger brother, Alfred, who also became a political economist and sociologist. His was a cultivated, prosperous family with a range of political and social views and contact.

Max Weber was a student at the University of Heidelberg where he enrolled in 1882 to study law. His studies were interrupted by military service, after which he reassumed his studies at the University of Berlin. He passed his bar exams in 1886, obtaining a doctorate in law in 1889. His thesis was on legal history covering commercial law in the Middle Ages.

After obtaining his qualifications, Max Weber spent some time working in legal practice and also in the public service. He was then given a research commission, working under Gustav Schmoller at the Verein für Sozialpolitik, a social science association.

Weber produced the East Elbian Report on the displacement of German agrarian workers in East Prussia by Polish migrant labourers. The report was politically controversial but was also greeted with some acclaim.

Max Weber's research led to an appointment at Freiburg University (1894). Then in 1896, he was given a professorship in political economy at Heidelberg University. In Heidelberg,  he became involved with other intellectuals, and soon a group known as the Weber Circle had formed. He developed a sound reputation as a political economist and academic.

Then in 1897, Weber suffered a nervous-breakdown which occurred not long after the death of his father. He stopped teaching in 1903 and devoted himself to research and study covering religious and philosophical subjects. This period led to the publication of The Protestant Ethic and the Spirit of Capitalism (1904-1905), a collection of essays.

Max Weber visited America during this time, and he also edited a major social science journal. He helped establish the Deutsche Gesellschaft fur Soziologie (1909)  and devoted his energies to studying the comparative sociology of world religions. This phase of his career was his contribution to the founding of modern social science.

During World War I, Max Weber was critical of the government and warned against various government policies including Germany’s annexation of Belgian, submarine warfare and the lack of democracy in Germany. He also called for constitutional reform, the empowerment of parliament and universal suffrage. He was on the draft board of the Weimar Constitution and was also part of the German delegation at Versaille. He was against the Treaty of Versaille. Publications from this time include The Religion of China (1916), The Religion of India (1916) and Ancient Judaism (1917-1918).

Max Weber returned to academia in 1919 and lectured at the University of Vienna, Austria and the University of Munich, Germany. The manuscript he was working on at the time of his death was published posthumously as Economy and Society (1922).

After his father’s sudden death in 1897, Max Weber suffered from anxiety, insomnia, and depression which led to a nervous breakdown and time spent in sanitoriums on a couple of occasions. In 1903, he ceased teaching for a time and devoted himself to study and research.

Max Weber married Marianne Schnitger, who would later edit his collected works and write a biography on him. Max Weber died in the Spanish influenza epidemic on the 14th June 1920.