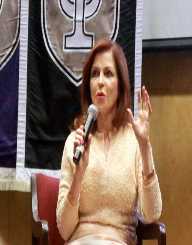 Maureen Dowd is an American liberal Columnist, Journalist, Newspaper Columnist, and a bestselling author. She is best known for the columnist part of her career, whereby she was awarded the Pulitzer’s award for her columns on `Lewinsky scandal’ during president Bill Clinton’s reign.

Also, she worked as a reporter with New York Times and was widely recognized. She is also a bestselling author and is the author of various books including `Bushworld; Enter at your own risk’ and `Are men necessary? When genders collide’. She has won many awards for example `the Damon Runyon Award.’

Maureen Bridgid Dowd was born on 14th January 1952, in Washington D.C. Her parents are Mike Dowd, who worked as a police inspector and Margaret Peggy. They are believed to have been of an Irish ancestry.  She attained her high school education at a school called Immaculate High school, completing her studies there in 1969. She then joined the Catholic University of America located in Washington, whereby she attained a Bachelor of Arts in English studies.

A bit later at around 1986, Maureen began working as the correspondent for Times Bureau. At this time, she had gained massive attention from readers, who noticed her incisive writing skills and loved her columns. Due to her reporting work, she received a Pulitzer’s prize in 1992. She was also awarded a matrix award in 1994 courtesy of New York women in communications.

In the year 1995, Maureen Dowd became a columnist for the New York Times. She got this position as a replacement of novelist Anna Quindlen. She grew in her career during her time here and won the Pulitzers’ award for distinguished commentary in 1999, and Damon’s Runyon awards the following year due to her journalism contributions.

On her column, she often wrote captivating articles on influential figures/individuals. In 1998, she wrote about the extramarital affair involving presidents Clinton’s infamous extramarital relationship, named the `Lewinsky Scandal,’ which was about his impeachment.

Maureen’s columns were often concerning politics, gender-related issues or Hollywood. On political columns, she used popular culture to support and enhance her political views. During her columnist career at the New York Times, some of her other famous columns include; `The red zone,’ ` Could Thomas be right,’ `Funny Girl,’ `Twisted sister and brothers,’ `A dynasty to duck’ and `rove’s revenge.’

Maureen Dowd came up with a book named `Bush world; enter at your own risk,’ which was published in the year 2005. The book advanced her criticism on President Bush’s administration. The next year, she published another book called `Are men necessary?; When sexes collide’. This book became which a major source of controversies and critic’s opinions. In the year 2005, she wrote a column about Barack Obama’s appearance in fashion magazines and was called `Obama Project Runway.’