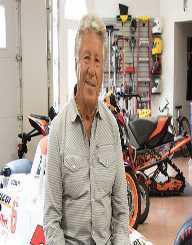 Mario Andretti was born on February 28th, 1940. His place of birth was in Montona, Italy which is now known as Montovum, Croatia. Andretti is a legend in the world of motorsport. His popularity gained him the recognition of being the best racers of all time. Andretti has won awards with Formula One, NASCAR and World Sportscar Championship. His first career wins on the circuit totals to 109.

Mario Andretti is a Croatian born car racer. He has a twin brother named Aldo. Both of them were born to Italian parents, Luigi Andretti and Rina. His father was a farm manager.

In 1948, the Andrettis were refugees after fleeing from their original homeland. This was as a result of the problems that Mussolini had brought to their society after siding with Hitler in World War II. In 1955, things changed as the family secured themselves a visa. They moved to the United States, Nazareth, Pennsylvania where they settled.

Andretti and his brother, Aldo had developed signs of loving to race cars even before they had seen cars. When they were young, they used to run with their toys. A few years later, the two brothers got employed to park vehicles in a particular garage. During this time, Andretti’s idol was Alberto Ascari, who was an Italian driver. In 1959, the twin brothers began racing in real tracks.

Their early career performance was not bad as the young racers began winning. During the first season of racing, Aldo was involved in an unfortunate accident which fractured his skull. In spite of this, after recovering, he went back to the racing track for another decade. Unfortunately, he was involved in another accident that left dents on his face. His bitter experience on the road made him retire at an early age.

Mario Andretti went on with his racing career. Surprisingly, his father was not aware of the fact that his boys were involved in the sport. He only learned about this after Aldo got into an accident in 1949. Nevertheless, he still did not want anything to do with the race track. As a result, he never associated with it until 1964.

In 1961, Andretti became a member of United Racing Club. In 1963, he began racing for American Race Drivers Club. A year later, he got his American citizenship. This gave him the opportunity of joining the U.S. Auto Club. Sooner or later, Mario Andretti was being included in the country’s highest paying races.

It did not take time before Mario Andretti took home the Rookie of the Year award. This was after coming in the 3rd position while racing the Indianapolis 500. His fame for running the Indy car went on to the late 60s. In the 1967-1968 period, he won the second place position consecutively. He earned top honors in the coming year with a total of 9 victories.

Formula One racing was the center of his focus during the mid-70s. Andretti’s career was at its peak in 1978. Well, he was the second ever American driver to win sport’s world championship. The first American car racer to do this was Phil Hill in 1961.

Throughout the Andretti’s five-year decade career, he made records that still have not been altered. His resume includes the fact that he was the Driver Of The Year in 1967, 1978 and 1984. Mario Andretti also stands recognized as the only driver to take home titles for Indy 500, Formula One titles and Daytona 500.

Mario Andretti retired from Indy car racing in 1994. He had amassed over 11 million dollars in all his winnings.

Mario Andretti got married to Dee Ann in 1961. Both of them reside in Bushkill Township, Pennsylvania. They have two sons together, Michael and Jeff who are both car racers.