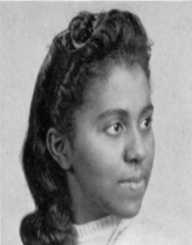 Marie Maynard Daly was an American biochemist and most famous for being the first African American woman to earn a Doctorate degree in Chemistry in the USA.

Marie Maynard Daly was born in Queens, New York on April 16, 1921. She was the firstborn in the family of three children. The younger siblings were fraternal boys. Her father Ivan Daly migrated from the Caribbean to look for a better life in the US. Her mother Helen Page Daly grew up in Washington DC and came from an education conscious family. A bright student in school, Ivan enrolled for education at the Cornell University with a partial scholarship. He discontinued his pursuit after his first semester for a chemistry degree for lack of boarding and upkeep funds. He got a job with the postal services in New York.

As a child, Marie Daly developed a reading culture. Her inquisitive mind led to her reading of the book Microbe Hunters in her maternal grandfather’s library while visiting them in Washington DC. In the book, she discovered the lives and achievements of microbiologists like Robert Koch and Louis Pasteur. Noticing her passion in sciences, her parents encouraged her to study hard and excel in her career despite being an African American woman.

She went to Hunter College High School in New York. She enrolled at Queens College after graduating from high school. She pursued chemistry in college and graduated with a degree in science majoring in chemistry in 1942. She got employed at the Queens College to teach chemistry to the undergraduates, so as she can support herself in her Master degree. In 1943, she got received her Master degree in Chemistry from New York University.

Four years later in 1947, Daly earned her doctorate in biochemistry from Columbia University. She wrote her thesis under the guidance of Dr. Mary Caldwell. Her thesis titled A Study of the Products Formed by the Action of Pancreatic Amylase on Corn Starch discussed how intestinal chemicals digest food in the body. Up to her graduation, Daly did not know her milestone achievement. She realized later on that she was the first African American woman to earn a Doctorate in chemistry.

In 1947, Daly was employed as a lecturer at the Howard University School of Physical Science. She held the position for until 1948. She secured a scholarship to join the Rockefeller University as a biochemist researcher in her post-graduate studies. In the university, Daly worked with other luminaries like Nobel Laureate Francis Peyton Rous and Leonor Michaelis. Rous did extensive research on the origins of cancer cells in living tissues.

Daly got a study grant from the American Cancer Society. She became an assistant to Dr. Alfred Mirsky. Under Mirsky, Daly studied the anatomy of proteins within the body cells. She regulated the protein metabolism to note the variations in cytoplasm activity, a major process in the creation of protein in the body. In 1955, she moved to Columbia University as a biochemist associate. She stayed at the College of Physicians and Surgeons for years until 1959. At the university, she researched on the correlation of aging and high blood pressure to atherosclerosis. In her study, she reviewed the metabolism and depositing of unwanted fat on the arterial walls of the heart. She noted that there was a higher risk of getting a heart attack in most of the people with a history of hypertension. Daly observed the relation between the deteriorating of the lungs and the smoking of cigarettes or primary smoke.

In 1960, she moved to become an assistant professor of biochemistry in the same institution. She served in her new posting until 1961. Daly teamed up with Dr. Quentin Deming to further research on the metabolism of the heart arteries. In her academic research, she also worked at the Yeshiva University in New York as an assistant professor of biochemistry in 1971.

In her quest to improve the racial inequalities and gender barriers, Daly encouraged the intake of black girls to study sciences in institutions of higher learning. She served in other boards in different capacities. Daly worked with the Health Research Council of New York. She served in the board of the New York Academy of Sciences for two years commencing 1974. Daly also served in other civil rights association like the National Association of Negro Business and Professional Women amongst others.

In 1986, she decided to leave the academic field. She first resigned from her post at Yeshiva University. With time she resigned from other academic posts in learning institutions. Two years later she founded a scholarship fund to aid the bright needy minority students to pursue studies in science and medicine.

Daly got married to Vincent Clark in 1961. She spent her time in retirement with him at their retirement home in Sarasota in Florida. She kept constant visits to her family members and close friends in New York.

She exercised her hidden passion for gardening and culinary skills away from the human and animal tissue cells that marked a better part of her life.

Marie Maynard Daly died on October 28, 2003, at the age of 82 in New York. She pursued her dream in a field where few African American women never dared to dream. Modern science today celebrates advancement in medicine due to her achievements.