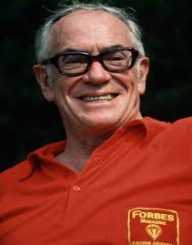 Malcolm Forbes was an American publisher, entrepreneur, and business person. His lavish lifestyle made him famous than his capitalist ideals.

Born on August 19, 1919, Malcolm Forbes was the third child in his family. The son of a Scottish immigrant, he was named Malcolm Stevenson Forbes. His parents were B.C Forbes and Adelaide Stevenson.

He enrolled in Lawrenceville School. Afterward, he enlisted at Princeton University. The young Malcolm graduated from Princeton in 1941. He had a degree in political science.

At the age of 22, he was drafted in the army. He fought for the US army in the WW2. His deployment was in France, Belgium, Germany, and Holland. Malcolm was discharged from the army in 1945, as an Infantry Staff Sergeant.

From his early years, Malcolm Forbes had a lot of interest in journalism. He founded his publication when he was eight years old. At the age of 13 years, he had his private printing line.

He used it to print magazines for the family and schools. Most of his summer holidays, he spent his time at his father’s office. Soon after his graduation, he inherited a weekly newspaper from his father. At Fairfield Times, Malcolm became the owner and publisher of the magazine.

Malcolm left to fight in the army. When the war ended, he came back to join his father in Forbes magazine. He joined as an associate publisher. Following his father’s death in 1954, Malcolm became the editor in chief.

Malcolm Forbes rose through the ranks to become president of the Forbes magazine in 1964. This came after the death of his brother Charles Forbes. Under his leadership, the magazine publication grew steadily. Its circulation increased to 720,000 up from the previous 100,000.

His capitalist ideals drove his vision to succeed. This made the Forbes be the most influential publication in the US. It is said that 250,000 units of the magazine were sold to millionaires. Chief Executive Officers of major companies used its influence to market their companies.

Apart from Forbes magazine, Malcolm Forbes also established other publications. These were the Nation’s Heritage magazine and Egg. The Egg was the art lover’s magazine.

It wrote about the nightlife of New York. To maintain his grip on the market, he threw lavish parties to advertisers and chief editors. Journalism aside, Malcolm also ventured in real estate. He developed properties in California, Maine and as far as Fiji.

The publishing millionaire had a sense of lavish entertainment. Malcolm Forbes' adventures varied from sports, escapades, and art collection. He had a mansion in London, a chateau in Normandy, France and an island in Fiji called Lauthala. In Morocco, he had a palace to his name. It is during his last birthday that he flew his over 800 guests to this palace in Tangier, Morocco.

They consisted of well-known business owners from New York and London. The entertainment parade included acrobats, musicians, and over 300 Berber horsemen. The total cost of the party is estimated at 2 million US dollars. The September 1989 party was extensively covered to the world. Malcolm loved to be in the spotlight.

In his art collections were many oriental paintings and crafts. His hot air balloons were custom made to his liking. Malcolm Forbes was an avid rider. He had a stable full of motorcycles.

The Harley-Davidson brand was his favorite. Later in life, he founded the Capitalist Tool. This was a motorcyclist club in New York. He also owned a Boeing 727 jet, several Highlander yachts.

So massive were the yachts that he used to celebrate his large parties on board. The worlds famous were also passengers on the yacht. Among them were King Hussein of Jordan, Presidents Ronald Reagan and George H. W. Bush, business tycoons Donald Trump and Rupert Murdoch.

Having succeeded in the business empire, he turned to politics. Malcolm Forbes was successfully elected to the New Jersey State Senate in 1951. Re-elected again to the state senate, he served until 1959. Malcolm then turned his ambitions to the state governors office.

He tried running for the governorship in 1957 but was voted out. After a brief stint of 8 years in public service, the political venture was over. He left politics for publishing in 1959.

Malcolm Forbes was born into a wealthy family. Soon after the war, he got married to Roberta Laidlaw in 1946. Their marriage lasted for 39 years. The couple divorced in 1985. During their union, they had five children.

These are Malcolm Stevenson Junior, Robert, Charles, Timothy, and Moira. Malcolm Junior is the better known of the siblings. He is the president of the family business. He also ran for presidential nomination for the US Republican party.

Princeton University awarded Malcolm Forbes the Class of 1901 medal. The award was for the best contributing undergraduate of his 1941 class.

After the war, the Army awarded him the Bronze Star. He also got the Purple Heart for his exemplary war performance as Staff Sergeant of the 334th Infantry Regiment.

Due to his love of motorcycling, he founded the Capitalist Tool. It was a members’ club for motorcyclists in New York. He also gave to charitable works. He was a regular at New York City’s Cat Club. The center promoted young local musical talents.

Malcolm Forbes died on February 24, 1990, at his home in Timberfields, New Jersey. The official cause of death is documented as heart failure. He was 70 years old. Though nothing much is known about his net worth, he was a wealthy man.

At his death, it is said he was about 400 million US dollars in net worth. Forbes magazine never put him in the list of 100 rich personalities of the world.

Controversy arose about his sexual inclinations. Some US mainstream journals published stories of Malcolm Forbes to have been a homosexual. They also alluded of him sexually advancing on young workers at Forbes magazine. Since he was dead, the truth was never established.

Malcolm Forbes was a giant of American business. He had a cunning sense of capitalism. By coercing the rich and famous, he managed to edge out his competitors. Like everyone, he had his dark side. But it is morally sane to say; he steered the publishing industry to great heights.

In everything he did, he exuded a winning character and utmost confidence. Like all other great movers in the world, he had a passion and loved what he did.