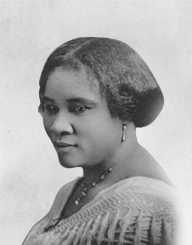 Madam C.J. Walker was one of America’s first African American self-made millionaire. She specialized in products of hair care. She was well known for her philanthropic activities. She was also part of the delegation that met President Woodrow Wilson in the White House to present a petition to make lynching a federal crime.

Madam C.J. Walker was born Sarah Breedlove on 23 Dec 1867 near Delta, Louisiana in a cotton plantation. Her parents were Owen and Minerva who were recently freed slaves. Her star sign was Capricorn. Sarah was the 5th child and first to be freeborn after the Emancipation Proclamation. She became an orphan at the age of 7 and lived with her sister and brother in law. They moved to Vicksburg, Mississippi in 1877. She worked in the cotton fields and had to face oppression both at work and at home by her brother in law.

Madam C.J. Walker married Moses McWilliams at the age of 14 to escape this situation. In 1885 she had a daughter whom she named A’Lelia.Two years later her husband died, and she moved to St Louis where her brothers worked as barbers. She was very keen that her daughter must be educated. She worked as a washerwoman and earned about $1.50 a day and sent her daughter to the City’s Public School. She also attended night school whenever possible.

Madam C.J. Walker suffered from a scalp infection which caused her hair loss. She tried various home remedies and also experimented with different treatments to improve her condition. She became a commission agent selling hair products for Annie Malone, another African Woman. While working with Malone, she used her knowledge to develop her line of hair products. In July 1905 she moved to Denver, Colorado with her daughter. She continued to sell products for Malone and also her products.

In 1906 Sarah married Charles Walker, a newspaper advertising salesman. After her marriage, she came to be known as Madam C.J. Walker. She started as an independent hairdresser and retailer of cosmetic creams. The hair care method developed by her revolutionized black hair care. The combination of scalp preparation, application of lotion and use of iron comb was known as “The Walker System”.

Madam C.J. Walker's products were different from the others because they were created for specific hair care needs of blacks. She also taught women hair care and grooming. She sold her products directly using a personal approach and later through saleswomen. Her husband was her business partner, and he also advised her on sales, advertising and promotion.

In 1906 Madam C.J. Walker put her daughter in charge of the Denver mail order operations and travelled with her husband throughout southern and eastern USA to expand their business.  In 1908 she relocated to Pittsburg and opened a beauty parlor and the Lelia College to train ‘hair culturists.’ After closing the Denver base, A’Lelia ran the operations from Pittsburg.

In 1910 a base was established in Indianapolis. Madam C.J. Walker also built a factory, salon and beauty school. Most of her employees were women. In 1917 her company had about 20,000 women working. She encouraged women to become financially independent. She started a beauty salon in New York City’s Harlem in 1913. Her business prospered well and achieved fame in other countries like Cuba, Jamaica, Haiti, Panama and Costa Rica.

Madam C.J. Walker is also known for her charitable and philanthropic work. She helped establish the YMCA, and her contribution was the most substantial amount given by an African American. She also made donations for homes for elderly, aids to churches and provided educational scholarships. She also contributed to the National Association of Colored People, Anti-lynching Fund, etc.

In 1917 Madam C.J. Walker commissioned the first licensed black architect Vertner Tandy to design her house in New York at the cost of $250,000.

Madam C.J. Walker died of hypertension on 25 May 1919. At the time of death, her assets were valued at over $ 1 million, and she was considered one of the wealthiest African American women. She bequeathed nearly $100,000 to orphanages and 2/3 of future net profits to charity.

Many scholarships and awards like the Spirit award, Madam CK Walker heritage Award were started in her honor. In 1993 she was inducted into The National Women’s Hall of Fame. The US Postal service in 1998 issued a commemorative stamp as part of its Black Heritage series. Her home Villa Lewaro was designated as a National Historic Landmark.