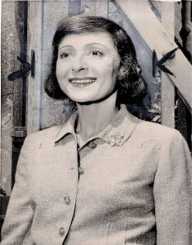 Luise Rainer was a German and American movie actress and theatre personality. Luise rose to stardom during the 1930’s and was the first actress to win back to back awards by the Oscars.

Luise Rainer's acting career started during her teenage years when she was around 16, under the tutelage of the likes of renowned Australian director Max Reinhardt. Luise soon made her name as a distinguished performing artist, capturing the attention of vast audiences and critics.

Later, Luise Rainer worked in various Australian and German films and was soon spotted and offered a contract by Hollywood whereby her career blossomed, winning the back to back Oscars.

Childhood And Early Life And Development

Luise Rainer was born on 12th January 1910 in Dusseldorf Germany. Her family was a Jewish and upper-class one with parents Heinrich and Emilie Rainer. The family consisted of two other brothers to Luise. Heinrich was a businessman brought up in Texas but later settled in Europe, while Emilie was a talented pianist.

Luise Rainer described him as a tempestuous and possessive dad, who often centered his affection and concern for her. Luise was raised in Hamburg and Vienna and described her childhood in Vienna as that of poverty revolution and starvation.

Luise was known to have been a quiet and shy kid at home but very active at school especially in extracurricular activities. Some of these were mountain climbing and champion running. More so, Luise liked creative arts and made paintings and attended dancing lessons. She often felt the need to expend her massive emotional and physical energy and thought becoming an actress would help her in this.

Luise's  father had other plans for her and wanted her to attend a good school and get married to the `Right man.’ However, she could not agree to this due to her `Tomboy’ nature and `Inferiority complex’ she saw on her mother due to her dad’s controlling nature.

From the tender age of six, Luise Rainer identified the entertainment as her passion, after being inspired by a circus act. When  16, Luise decided to follow her acting dreams. She traveled to Dusseldorf for an audition at Dumont Theater, under the pretext that she was going to visit her mother.

Luise Rainer stage career kicked off when she was a teenager. She portrayed a character named Wendla in `Spring Awakening ‘at the Dusseldorf Schausspielhaus School of stage art. At the time, Luise was apparently an untrained actress but greatly impressed many by her performance.

Later Luise Rainer studied acting under the tutelage of Max Reinhardt. At this time Luise gained massive attention from audiences and critics, who thought she had an unusual talent for an actress her age. It did not take long for her to become an eminent stage actress in Berlin. She also became a member of Reinhardt’s Vienna theatre assemble and toured with the theatre company in major cities across Europe

Some of  Luise's  performances at the time include plays, i.e. `Men in white’ by Sidney Kingsley, `Six characters in search of an author’ by Luigi Pirandello and `Measure for Measure’ by William Shakespeare among others  At the time, Luise also appeared in various German films

In 1934 Luise Rainer was spotted by an MGM talent scout Phil Berg when she was performing in a play. She was instantly offered a three-year contract in Hollywood. Luise is said to have had little interest in film and wanted to stick to theatre only but was inspired when Luise watched `A farewell to arms.’

At the time Luise was in Berlin, she witnessed the Reichstag fire which was a sign of past happenings in Nazi Germany.Luise was able to relocate to the US despite many of her Jewish friends and family members not being able to make it and thus faced the mayhem by the Nazis and Hitler.

In Hollywood, MGM’s studio head Lois Mayer instructed actress Constance Collier to help train Luise so that she could improve her English, get better dialect and dramatic modulation. She made her debut in the Hollywood film scene in 1935. This was a romantic comedy named `Escapade,’ whereby Luise starred alongside William Powell.

The film was a massive boost to Luise Rainer start, gaining her instant popularity as `Hollywood’s next sensation.’ Her next film was named `The Great Ziegfeld,’ whereby she portrayed the character of a Polish-born singer and French performer named Anna. Courtesy of this film, Luise earned the first` Academy Award for best actress’ and `New York film critics Award.’

After that, Luise Rainer took up a role of O-lan, a subdued Chinese wife. This part proved her versatility and talent since it was contrasting to the lively character of Anna Held in the film `The good earth.’ This awesome and memorable performance earned Luise yet another `Academy award for the best actress,’ becoming the first actress to win the award back to back. Despite this, she was unable to achieve such great heights in her other films, i.e. `the Toy wife’ and `Big city’ (1937).

Luise Rainer remained on contract with MGM until 1940, whereby she moved to New York with her husband, Clifford Odets.

At the time Luise made onstage comeback courtesy of plays `Behold, the bride in `Palace theatre’ Manchester. Some of her other performances were in `Saint Joan’ on March 10, 1940, in `Belasco theatre’ Washington D.C and `A kiss for Cinderella’ at `Music box theatre in 1942. Later Luise made a comeback in movies `The Gambler’ and `Hostages’ in 1943 and 1947 respectively. She also featured in T.V shows, i.e., `The love boat’ (1984) and `The Chevrolet tele-theatre’ (1949).

Luise Rainer got married on January 8, 1937, to Clifford Odets. However, the marriage did not last long and ended on May 14th, 1940. Later in 1945, she got married to publisher Robert Knittel on 12th July. They had a daughter named Francesca Knittel-Bowyer. Robert died in 1989 on June 15th.

Luise Rainer died on 30th December 2014 in London after suffering from pneumonia. She was 104 years of age and only about two weeks shy of her 105th birthday.