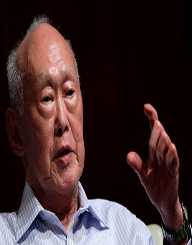 Lee Kuan Yew was born on September 16, 1923, in Singapore.  His family was wealthy with lineage in the country that dated by to the 1800s.

Lee Kuan Yew studied in English-speaking schools such as Raffles Institution.  Lee Kuan Yew later went to Raffles College between 1940 to 1942 under a scholarship.  Lee Kuan Yew did not go to the university right after graduation because of World War II and the occupation of Singapore by the Japanese.

Lee Kuan Yew started his studies at the London School of Economics before attending the Fitzwilliam College at University of Cambridge from 1947 to 1949.  Lee Kuan Yew graduated with honors, earned his law degree, and passed the English bar.  Lee Kuan Yew chose to practice law in Singapore.

Through his experiences in Japanese-occupied Singapore as well as his insight regarding Britain's hands-off approach to ruling his country, Lee Kuan Yew knew that Singapore needed to be governed on its own. While in England, Lee Kuan Yew worked for John Laycock who was running for election on the Progressive Party ticket.  This time as an election agent helped Yew establish the People's Action Party in Singapore. When Lee Kuan Yew won his first election in 1955, he was a representative of his party when he discussed the future of Singapore with Britain.  The People's Action Party won the majority of the Legislative Assembly in 1959.

When Singapore earned its place as a self-governing country, Lee Kuan Yew was made the first prime minister of the nation. It took a lot of work for Lee Kuan Yew to make Singapore more secure.  It was originally a naval port for British ships. For one thing, Lee Kuan Yew created the Housing and Development Board to help provide affordable homes. The nation had limited resources.  Lee Kuan Yew worked with his country's neighbors to establish a federation.  To unite with Malaya, Brunei, Sabah, and Sarawak, they had to declare complete independence from Britain. This occurred in 1963.  However, the federation fell through two years later, and the Republic of Singapore was on its own.

As a republic, Lee Kuan Yew connected the nation to the United Nations as well as the Association of Southeast Asian Nations.  Though Lee Kuan Yew declared the country as a neutral nation, he also created the Singapore Armed Forces with required military service as of 1967. Lee Kuan Yew united the country in culture and language as well.  Rather than deal with numerous Chinese dialects, he promoted the “Speak Mandarin Campaign.”  Lee Kuan Yew also united the Chinese- and English-speaking universities as one National University.

Lee Kuan Yew was a part of many changes to establish Singapore as a country that could maintain a high level of excellence.  Upon his resignation in 1990, Lee Kuan Yew maintained an advisory role as Minister Mentor of Singapore from 2004 to 2011. His deputy prime minister Goh Chok Tong was next in line.  By the time Yew stepped down, Singapore had gained notice as a wealthy Asian national with little or no crime or corruption.

Their son Lee Hsien Loong became Prime Minister in 2004 while their other son Lee Wei Ling is a 2008 Olympic silver medalist in badminton.

When it came to the success of the new Republic of Singapore, Yew followed a method of trial-and-error.  Along the way, he was criticized for suppressing individual freedom and human rights.

Lee Kuan Yew is recognized as the Founding Father of Modern Singapore.  He served in his position for 30 years.  It is also the longest rule by a prime minister in any country to date.

Through his efforts, he managed to take the new self-governing country into an independent, industrialized nation.  Under his leadership, there was less than one percent of families living in poverty, no homelessness, and no unemployment.

•    Order of the Companions of Honor
•    Knight Grand Cross of the Order of St. Michael and St. George
•    Freedom of the City of London
•    Woodrow Wilson Award for Public Service
•    Order of the Rising Sun
•    Lifetime Achievement Award from U.S. -Asian Business Council
•    Kazakhstan Order of Friendship