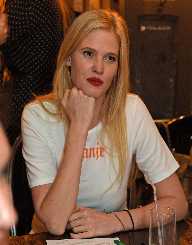 Lara Stone is well known in the fashion world. She is known for being in the business of fashion for many years. She entered into the industry before clocking 15. However, she tried her best to impress the people around the world with her styles and self-confidence. She is known to have modeled for many of world’s best brands which include Louis Vuitton, Calving Klein, and Dolce & Gabbana. Surprisingly, she made the world stood up with her talent, beauty, and ability to throw herself like top models.

Lara Stone has also managed to be one of the top-earning models in the fashion industry. Although she added a tooth-gapped smile that many appreciated, she was considered to be a little bit unconventional with her look. She hates walking on the ramps and has a very strong and unaffected reputation.

Lara Stone was born in Mierlo to a British decent and a Netherlander on the 20, December 1983. She was noticed during her vacation at the Metro train in Paris while she was 12 years old. Later on, in 1999, she decided to participate in Elite Model Look competition even when she was not up to 15 years old. LAthough, she did not win the event, she was able to get people’s attention there. Thus, she started modeling at Elite Model Agency.

She worked with Elite Model Agency for seven years trying to establish her feet in the fashion world. Lara Stone later got herself into IMG Models, a division of the IMG Worldwide, in 2006. Her first assignment then was to do what she does not like – a ramp walk for an Italian Designer. She got draped in the brand attire of Givenchy. She later got herself involved in Calvin Klein’s show later in the year.

In 2007, Lara Stone appeared in one of the world-famous magazine, Vogue. Thus, a lot of people’s attention was grabbed by the sex symbol. The readers then demanded her picture to be on the cover of Vogue for April that year. Thus, her picturegraced the magazine’s cover page. Ever since the beginning of her, she has had the opportunity of working with Isabel Marant, Christopher Kane, Dolce & Gabbana and Max Mara. Lara Stone also tried her hand by promoting several brands like Just Cavalli, H&M and Belstaff during her Spring/Summer campaign. She later got selected with some models for American MAgainze, V, September edition.

Lara Stone later got a contract with the Pirelli Calendar to work as a model for the calendar’s photoshoot. Shewas invited alongside with Emanuela de Paula, Daria Werbowy among others. She later appeared on the cover of the Vogue again in May 2009. In October 2009, she went on to appear in a blackened body in a French edition of the Vogue. This appearance was a point of controversy in France. Going down to 2010, she had a very successful and eventful year then. Lara Stone had the chance to become the model of the perfume Infusion d’Iris, a product of the brand Prada. She also got the opportunity of putting an endorsement on several and world-famous brands like Versus, Jagger and Louis Vuitton. She also appeared in the Pirelli Calendar later in 2011. Later in 2013, she got approached by the L’oreal, a French Cosmetic brand for the promotion of their products.

Lara Stone has had a successful and eventful career; she struck a deal with Calvin Klein which happens to be her biggest career achievement. She endorsed three of the Calvin Klein products which include Calvin Klein Collection, CK Calvin Klein, and Calvin Klein Jeans. She got into limelight with this.

Lara Stone was addicted to alcohol and had to go to a rehabilitation center for her to overcome her drinking problem. However, this is based on the report of the 2009 publication of Vogue UK. She later started seeing David Williams that year before she tied the knot with him in 2010. She had a son named Alfred with him. She gave a revelation some time ago that she does not really like walking on the ramp despite being a model.