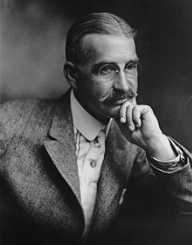 L. Frank Baum was an American author of children comical books. He is famous for publishing the children’s favorite, The Wizard of Oz.

On May 15, 1856, Lyman Frank Baum was born. He was born in a New York family of nine siblings, five of them dying in their childhood. He was the son of Benjamin and Cynthia Baum. Baum was named Lyman after his uncle. He loathed the name, abbreviated it and preferred being addressed as Frank Baum. He was raised in a financially stable family.

He was homeschooled with private teachers until he was twelve. He joined the Peekskill Military Academy. At the age of 14, he left the school after experiencing bad health. He never continued with his education. He started exploring his dream in the arts. He started writing after getting a printing machine from his father. He established a newspaper and named it after their expansive estate. He published The Rose Lawn Journal which included advertisements from the local business ventures. He distributed the journals to the family friends free of charge. He operated another journal called The Stamp Collector and founded a stamp selling shop.

When he turned 20 in 1876, Baum went into poultry farming. He established another monthly journal The Poultry Record in 1880. He published his first book at the age of 30 in 1886. In the book titled the Book of the Hamburgs, he narrated his experience in poultry farming. He advised farmers on how to operate the rearing of the chicken varieties of Hamburgs.

Apart from writing, Baum enjoyed the fun and being in the limelight. He was the Santa Claus of the family. He sold and light fireworks on American independence and celebrations. He was the lightening effect during festivities in the neighborhood.

Baum left the journal writing and went into the theater. He had mixed fortunes in journalism and theater business forcing him to retire from both. He turned to write children stories. He derived his passion from the storytelling sessions he shared with his four sons. In 1897, he published his first book titled Mother Goose in Prose. In 1899, he published Father Goose, His Book.

In 1900, he created a fantasy world of witches, wizards, and munchkins. His fantasy creation became his trademark series. He published The Wonderful Wizard of Oz. In the book, he narrates the story of a young girl named Dorothy. She gets lost in the woods and tries her best to find her way home. In her quest to return home, she is accompanied by a tin woodsman, a cowardly lion, and a scarecrow. The book was well received by the children readers. It served the intended purpose of fantasizing the fairy tale in the minds of the young readers.

In 1902, he created a musical story staged at Broadway Theater in New York. He did the musical the Life and Adventures of Santa Claus. He intended to arouse fantasy to both the children and their parents using one platform. The audience applauded the performance.

Baum turned some of his stories into films in Hollywood. He established The Oz Film Manufacturing Company in 1914. When his health started to fail him, Baum left the daily operations of the company to his son Frank Joslyn Baum. Joslyn Baum changed the name of the company to Dramatic Feature Films.

Baum married Maud Gage on November 1882 and had four children. The couple lived together until his death.

Apart from writing, Baum was a designer. He designed the attractive chandeliers and overhead interiors of the dining area of Hotel Del Coronado in San Diego.

Baum suffered failing health from 1918. He had a gall bladder surgery in 1918. He was bedridden after the medical procedure. He wrote his last books while on his bed. On May 6, 1919, Frank Baum died in his Hollywood home in California.

He failed to graduate from high school because of a faulty heart. Baum suffered a setback and agony for dropping out of school. He dedicated his life to bringing joy to children with heartaches.

Years after his death, the film industry still produces animated versions of his Oz stories to the amusement of children. His dream of bringing joy to children outlived him.